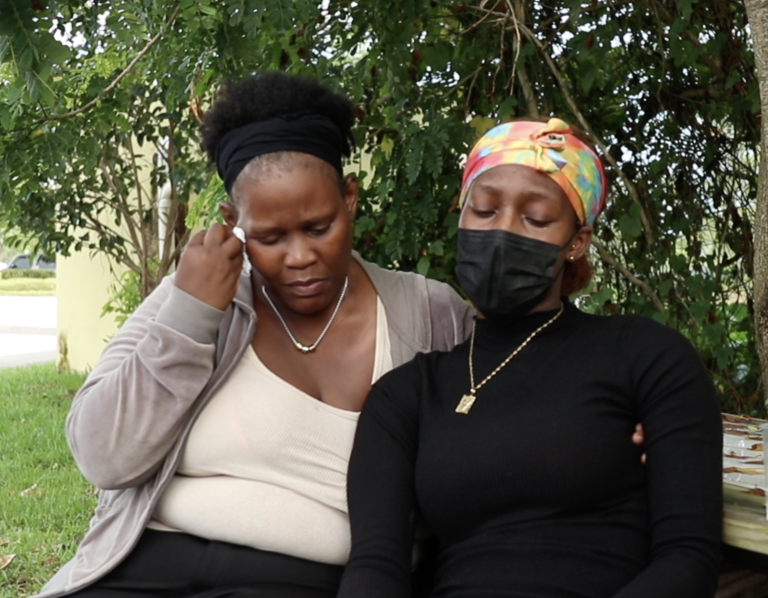 Retha (left), aunt of plane crash victim Alethia Newbold, who died on Sunday, and Patsy Higgs (right), a survivor of the crash, who is now nursing a broken rib, bruised back and painful limbs

NASSAU, BAHAMAS — A survivor of the plane crash on Long Island crawled over the body of her dying friend, Aleitheia Newbold, to exit the rubble in the scary and disorienting moments after the Piper PA-31 aircraft went down.

Patsy Higgs is now nursing a broken rib, a bruised back and painful limbs.

She said doctors have prescribed her “medications and depressants.”

She can barely walk and needed help to move as she gathered with Newbold’s family at Odyssey Airport yesterday for the arrival of Aleitheia’s body from Long Island to New Providence.

Higgs and the family were inconsolable as the body of the young mother was placed in a hearse.

They said Newbold was on the phone with her boyfriend as the plane fell and she cried out “my baby” in what is believed to be some of her last words.

“Before we crash she was leaning forward and she say something about the door,” Higgs recalled through tears in an exclusive interview with Eyewitness News.

“She was pointing to the door, she couldn’t see.

“She was in the back of the plane, she couldn’t see the front like how we could see.

“She leaned forward, she ain had on no seatbelt.”

Higgs said the ordeal was terrifying.

“When the plane crashed she wasn’t behind me,” she said.

“She sat in the place behind me. I thought she crawled out before me and when I crawled out, I crawl on top of her.

“She was laying there and she look like she was in pain and I tried to move her, but the pilot came and he checked on her and he said she’s okay.

Higgs said the group, which included the pilot Bradley McPhee, Nia Bethel-Sears, Le’Annka Rigby, Rhiannon Thompson and Aliicia Rolle, then tried to get as far away from the smoking plane as they could.

They tried cutting through bushes, but struggled to get through the bushy marshes.

“…Because it was so many bushes we couldn’t really pass,” Higgs said.

“We had to break down branches to pass and they told us to keep going, keep going, try get as far from the plane as possible.

“I wanted to go back, but they told me I couldn’t go back and he came over and said she’s okay, she’s okay.”

“I was so scared,” she said. “And I asked them if they leave her and I told them don’t leave her.

“We had to go and they say they had to leave her.”

Newbold’s grief-stricken relatives believe rescuers were too concerned about the daughter of Works & Utilities Minister Alfred Sears when they arrived on the scene.

Newbold’s aunt, a woman who identified herself as Retha, believes her niece would still be alive if rescuers paid more attention to her.

Higgs said: “When the rescue team came, we tried to crawl through the bushes and stuff; one of the guys, he was like, where is Minister Sears’ daughter? And Lelee (Alethia) was on the ground. She wasn’t moving. They told me she was okay.”

Retha said her niece should have gotten more attention.

“That someone who lifeless, who ain’ moving, why you can’t check for them first?

“That’s what this is because for them to come on the scene with a plane crash and a bunch of Bahamian women they have family, and you only gon’ ask for one person child? “

She continued: “Only his daughter? You walk over someone on the ground to go to someone who standing up?”

During the ordeal, former Prime Minister Dr Hubert Minnis found out about the plane crash after he called Sears to discuss a constituency issue.

Minnis later spoke to one of the survivors, Aliicia Rolle, and helped her provide care and assessment to Sears’ daughter.

Minnis told Eyewitness News that he did not know the woman was Sears’ daughter.

He insisted Sears was concerned about the well-being of all on the plane, not just his daughter.

“(Sears) was concerned about everybody,” he said on Sunday.

“I hear people saying he was concerned only about his daughter, but I can say that wasn’t true.”

Investigators from the Air Accident Investigation Authority continue to investigate the crash.

Deputy Prime Minister Chester Cooper said yesterday that he’s hopeful the report can be expedited to provide answers to the families, survivors and Bahamian public.