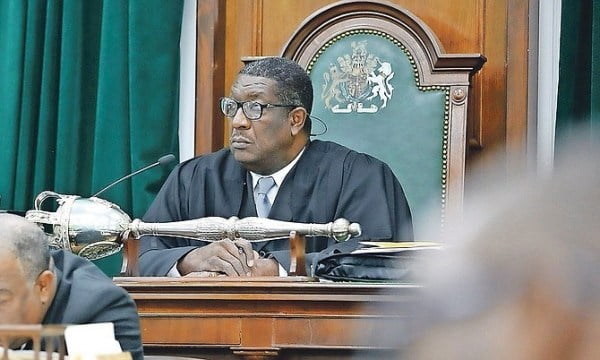 Moultrie says PM has good intentions, but system must be corrected

NASSAU, BAHAMAS – While acknowledging that his recent remarks about large Cabinets leading to corruption may not be popular among some politicians, Speaker of the House of Assembly Halson Moultrie said the time has come for Parliament to “honour the conventions of the Westminster system”, instead of acting as a “department of the Cabinet”.

Speaking to Eyewitness News Online, Moultrie said the view that prime ministers seek to retain popularity by appointing as many people as possible to the executive “is the real issue” behind statements he made earlier this month while addressing a group of teachers visiting the House.

“The Parliament then becomes a rubberstamp, and we have been functioning like a department of the Cabinet, which is absurd in a democracy.

“There is no chance of accountability when that happens and that is why I predicted despite all good intentions — because I sincerely believe the prime minister has good intentions with respect to accountability and transparency — but unless the system is corrected, the system will produce what is has been over the decades, which is corruption, plunder, excessive spending and borrowing, and an increasing national debt. That is the realty of The Bahamas since 1967.”

Moultrie is not the first speaker of the House to make that assessment.

In December 2015, former Speaker of the House of Assembly Dr. Kendal Major said he believed that large cabinets violate the separation of powers outlined in the constitution by creating what he called an “elected dictatorship”.

He also asserted that the Westminster system had been bastardized through the actions of various prime ministers.

Of the 38 elected members of Parliament in The Bahamas under the last Christie administration, 15 were full Cabinet ministers and four were ministers of state.

One senator was a full minister and another was a minister of state.

Article 72 (2) of the constitution states that the Cabinet shall “consist of the prime minister and not less than eight other ministers (of whom one shall be the attorney general)”.

While in opposition to the Christie administration, the Free National Movement strongly criticized the size of the Cabinet, often characterizing the PLP administration as the “most expensive government”.

The speaker has previous said the size of Cabinet and parliamentary secretaries should not exceed 17 or 43 percent of the elected members of Parliament.

Addressing Moultrie’s statement about large cabinets leading to corruption, Attorney General Carl Bethel said he was unaware of any circumstance in recent years where a large Cabinet led to corruption, and added that the speaker should not “deal with hypotheticals, but with the realities”.

He said while the notion was possible, Moultrie should have provided context to the statement, so as not to launch what some could interpret as a criticism of the present structure of the government.

Moultrie added that the executive has control of the budget for Parliament and its resources, as well as its administration, forcing the legislative branch to act as “a department… of the Cabinet”.

“That should never happen,” he said.

“For example, the judiciary; there is a statute governing the independence of the judicial branch.

“You cannot imagine the executive branch controlling the courts and the chief justice.

According to the speaker, the bill has been shared with parliamentarians and senators for review.

Moultrie added that The Bahamas is among the few member-states of the Commonwealth Parliamentary Association that does not have an autonomous, independent parliamentary service, something he said causes embarrassment when all speakers and presiding officers meet.

“Even some of the dependent territories like the Turks and Caicos Islands and Bermuda are more advanced that The Bahamas,” the speaker said

“In my estimation it is very embarrassing when I got to those meetings when questions are put to me when all speakers and presiding officers get together, and to try and explain why we are lagging so far behind.

He added that while government has expressed support of the measure, “I am of the view that we are simply mobbing to slow”.

When Moultrie made a similar call for greater autonomy of Parliament in September 2018, Bamboo Town MP Renward Wells, the leader of government business in the House, assured that Cabinet was already addressing those concerns, namely an independent statutory parliamentary service with administrative and budgetary control for the institution.