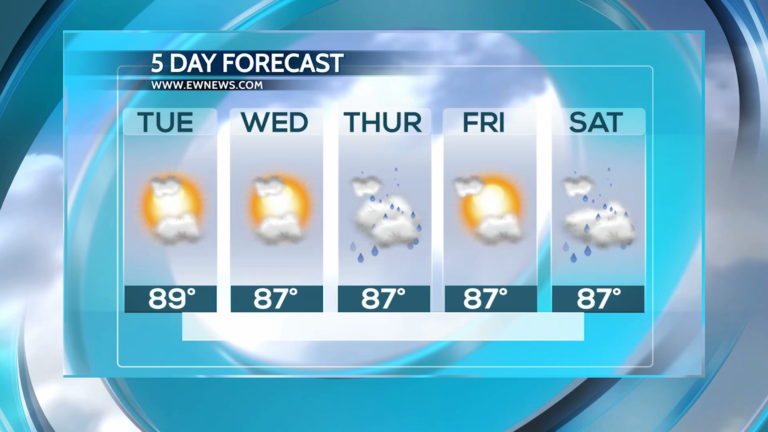 Officials in the Meteorology Department confirmed Tuesday that summer temperatures will continue to spike and warned Bahamians to take the necessary precautions to ensure that they remain hydrated.

While the weather office provides daily daytime high temperatures which can soar well into the 90’s, Deputy Chief Meteorologist Basil Dean warned that due to the heat index, persons might actually feel a lot hotter than actual temperatures suggest.

“The actual air temperature is what we actually forecast,” Dean said, “But what your body is responding to as a result of the amount of moisture in the atmosphere, which makes it feels a lot warmer than it is, is what we refer to as the heat index.”

“This morning at 8 o-clock, the actual temperature at the airport was 84 degrees Fahrenheit, the relative humidity was 74 per cent and when we combine those two in the heat index equation, it translates to 92 degrees Fahrenheit,” he explained.

“When temperatures spike at these levels, it is important for persons to remain indoors as much as possible in cool environments and to stay hydrated.”

Local fitness trainer and nutritionist Torquelle Nesbitt underscored the importance of this.

“My biggest tips for hydration is to drink water with every meal. Make sure you’re getting enough water in with each meal and throughout the day,” Nesbitt said.

“If that means setting a water schedule then do that because you even lose brain function when you don’t have enough water.

“Your suggested daily water intake is calculated by dividing your body weight by two and that should be the amount of ounces you drink per day.

Dean confirmed that temperatures have not spiked above normal temperatures which weather forecasters usually see during the summer months.

However, he quickly cautioned that it is not impossible for temperature scales to tip if atmospheric conditions present certain variables.