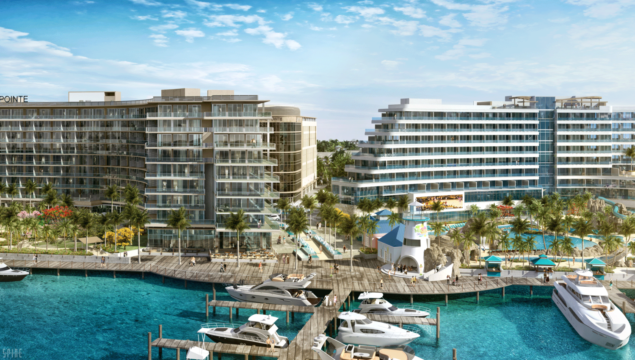 An image of The Pointe Development. (Courtesy of www.pointebahamas.com)

The Pointe Resort, which is still under construction, has not been consistent in its hiring practices to follow the 70 to 30 ratio of Bahamian workers to foreign labour, claimed Labour Director John Pinder in a recent interview.

Pinder said such checks [of workers] are made regularly by his office, to ensure that they remain in compliance with the Heads of Agreement (HOA).

“We are finding that when Bahamian contractors are in receipt of these subcontracts from the company, they are guilty of hiring foreign labour, and in most instances that too is not 70 to 30, so it is something that we have to keep monitoring to ensure that everyone, not just the main company (China Construction America) remains in compliance,” Pinder said.

Last Month, Labour Minister Dion Foulkes said the HOA between the Pointe and the government made under the previous administration had two interpretations.

Foulkes said the Minnis administration has decided to interpret the clause that calls for a 70/30 labour in favour of Bahamians, as a requirement to be satisfied over the duration of the entire project and not a fixed ratio. However, this was questioned by Progressive Liberal Party leader and former minister of works, Philip Davis,  who called on Foulkes to provide the clause. He also questioned why the government would adopt an interpretation that disadvantaged Bahamians.