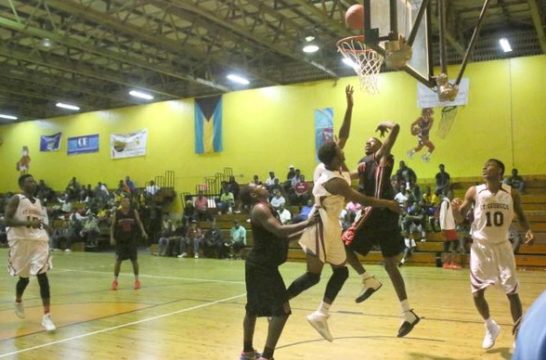 The top senior boys and girls teams in the country will vie for the chance to be called the number one team in the country in their respective divisions. (Photo credit: Bahamas Local)

Hosted by the Ministry of Education, Science and Technology, the three-day tournament is being staged at both the St. Georges High School and Sir Jack Hayward Gymnasiums.

Nationals action begins at 11:00 a.m. with the opening ceremony, followed by a senior boy’s matchup between Saint Augustine’s College (SAC) and C.I. Gibson. The Championship games in each division will be staged on Sunday. The senior girls play at 3:00 p.m., the small schools/Family Islands will play at 5:00 p.m. and the senior boys play at 7:00 p.m.

“It is through our alliance with the Bahamas Basketball Federation (BBF) that we are able to be a part of a sanctioned national tournament,” said Evon Wisdom, senior education officer in the Ministry of Education.

“So often, some tournaments are thought to be national championships, but they are not unless they are sanctioned by the authority that governs the sport. So, we are pleased to have the BBF officially run this tournament. We are happy to be back in Grand Bahama.”

The high school nationals will run a double elimination format and the opening matchups will be based on rankings done by the Bahamas Basketball Federation (BBF).

“We are happy once again to host this tournament,” said BBF President Charles “Softly” Robbins.

“I would love to see this tournament move to any island that has a gym, so that those people can see the kind of talent that we have in this country.”