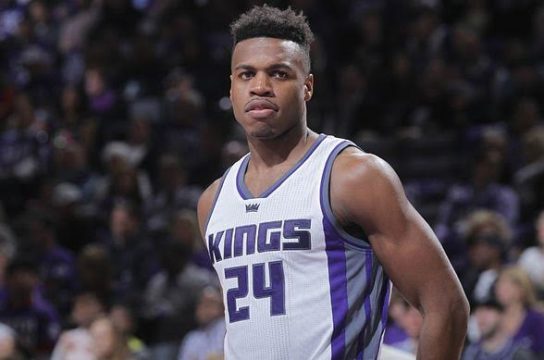 SACRAMENTO, CA - APRIL 11: Buddy Hield #24 of the Sacramento Kings looks on during the game against the Phoenix Suns on April 11, 2017 at Golden 1 Center in Sacramento, California. NOTE TO USER: User expressly acknowledges and agrees that, by downloading and or using this photograph, User is consenting to the terms and conditions of the Getty Images Agreement. Mandatory Copyright Notice: Copyright 2017 NBAE (Photo by Rocky Widner/NBAE via Getty Images)

In the final game of the season, Hield scored 14 points on 6-13, shooting from the field for the Sacramento Kings in a 96-83 win over the Houston Rockets. The second-year guard also grabbed five rebounds, dished out five assists and came up with two steals in yet another strong effort off the bench.

In his first season as a true bench player, Hield averaged 13.5 points, 3.8 rebounds. 1.9 assists and 1.1 steals across 25.3 minutes over 80 games, 13 of those starts. It’s likely that the 24-year-old will battle fellow young shooter Bogdan Bogdanovic for the starting shooting guard job, heading into the 2018-19 campaign.

This season, Hield became a legit Sixth Man of the Year candidate. According to the Grand Bahamas native, his success was predicated on the fact that he bought into coach Dave Joeger’s system.

“I think coming off the bench was the best thing for me this season,” Hield said about taking on a new role.

“It helped me to slow down a little and let the game come to me instead of going out and chasing it.”

Hield said taking a step back allowed him to be a more complete player, opposed to just looking for his shot every time he had the ball. He averaged just over two assists per game the last two months of the season.

“Just making plays for my teammates and not thinking selfishly,” Hield said. “That’s going to open more doors and that’s helped me, and I’m going to keep building on that.

“You watch guys finish with 15 points and have eight assists. They make plays for teammates and still have a great game and I think that frees you up, that makes you feel better as a player, that you’re making plays.

Hield scored in double figures in 53 games this season and had 20 or more 13 times. He scored a season-high 27 points in a 97-95 loss to the Los Angeles Clippers on November 25.