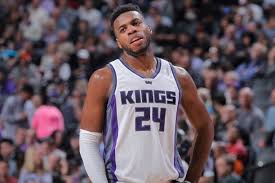 Although Chavano “Buddy” Hield is best known for his shooting prowess, over the last few National Basketball Association (NBA) appearances, the 6’5” wingman has shown a different side of his game.

Coming into the league, there were questions as to whether Hield’s game could evolve to be more than just a shooter. This season, he’s answered those questions.

When he was traded to Sacramento midway through his rookie season, Hield averaged 2.1 turnovers per game. This season, Hield has brought that down to 1.4 per game and 2.1 per 36 minutes.

But it’s Buddy’s passing that has been the most pleasant surprise for Kings fans as of late. Through 11 games this month Hield is averaging 3.1 assists per game with a 19.9 assist percentage.

The Grand Bahama native has led the Kings in assists the past three games and matched his career high with seven last Friday in a win at Golden State.

“Just making plays for my teammates and don’t think selfishly, about myself,” Hield said.

“That’s going to open more doors and that’s helped me the last six games, and I’m going to keep building on that.”

Hield admitted that he spent most of his playing time this season just searching for his own shot but said talks with teammate Bogdan Bogdanovic and reviewing game film have helped him begin to find his teammates, which creates more space for everyone on the floor.

“You watch guys like Bogi and then finish the game with 15 points and have eight assists,” he said.

“They make plays for teammates and still have a great time and I think that frees you up, that makes you feel better as a player, that you’re making plays.

“Teams are going to play me regardless because of how I shoot the ball. Just making the right play, don’t make the tough play, make the right play, the easy play and just go out there and execute everything.”

Hield’s defense has also picked up in recent weeks. His defensive rating of 107.2 is fourth-best on the team this season. Only Frank Mason, Jakarr Sampson and Jack Cooley have better ratings.

Hield doesn’t have to be elite at every aspect of his game for Sacramento to succeed, he just has to ensure he doesn’t become a ball-stopper on offense, and is able to at least be a good team defender.

The Kings will be in action again tonight against the Atlanta Hawks. Tip-off is set for 10:00 p.m.