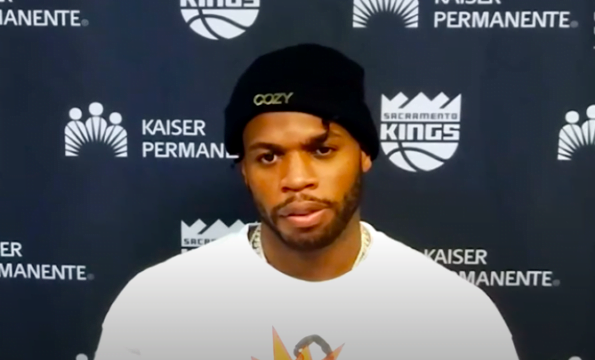 Buddy Hield speaks to the media after the Sacramento Kings' first scrimmage game in the NBA bubble in Orlando, Florida.

NASSAU, BAHAMAS — Sacramento Kings guard Buddy Hield led the team with five rebounds, a steal and an assist in 24 minutes of action in Wednesday’s 104-98 scrimmage loss to the Heat.

Sacramento has two scrimmages remaining before it takes on the San Antonio Spurs on Thursday as the National Basketball Association (NBA) resumes its 2019-2020 regular season in Orlando, Florida.

Following his first game back, Hield said ‘things went far from perfect’, however, he feels they can knock off the rust fast enough to be at full strength when the official games begin.

“It was fun. Getting back out there and showing what we can do. Hopefully we can watch some film and build off that before we enter the fire of the eight game tournament” he said.

Hield was one of the last Kings players to enter the NBA bubble after testing positive for coronavirus in June, resulting in him missing several team practices.

“I’m really trying to get my legs under me,” Hield said. “I was out for about three weeks, so to make up, I’ve been putting in extra work. Moving back and forth, just trying to find my groove and get more comfortable out there.

“In this environment you have to be mentally locked in. There are no fans to shift the momentum. It’s definitely something that we have to get used to, but there are the times we’re living in.”

The Kings are one of 22 teams that are set to take part in the NBA restart.

The league moved to suspend its season indefinitely on March 11th after the first player tested positive for COVID-19.

Sacramento held a 28-36 record sitting 3.5 games behind the eighth-seeded Memphis Grizzlies for the final playoff spot in the Western Conference.