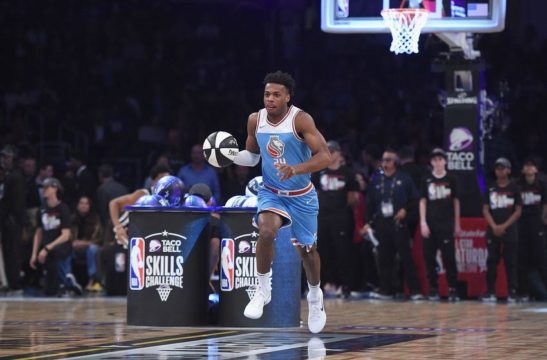 Chavano “Buddy” Hield had his hands full this weekend, competing in two events over the course of the National Basketball Association’s (NBA) All-Star Weekend in Los Angeles, California.

Hield’s teammate Bogdan Bagdanovic scored 26 points and was named as the game’s Most Valuable Player.

“It was good fun,” Hield said about the game. “It’s like an All-Star game, so it isn’t really too competitive, but it was good to get out and play with team World. These games show how much the world is catching up in the game of basketball. It goes to show that the work everyone is putting in is paying off.”

Hield wasn’t able to build off the momentum from the Rising Stars Game, as he suffered a first round loss in the Taco Bell Skills Challenge to Brooklyn Nets guard Spencer Dinwiddie, who went on to defeat Chicago Bulls center Lauri Markkanen in the final. Hield was ahead the majority of the round, but was unable to make the final three-point shot to seal the deal.

“It’s tough because I was ahead,” he said. “I had fun doing it. I wouldn’t mind doing it again.”

“It’s something I didn’t believe would happen in my lifetime, so I’ll embrace it and thank God for me being here. So I’m just having fun and I’m glad I’m done with it so I can relax a little bit.”