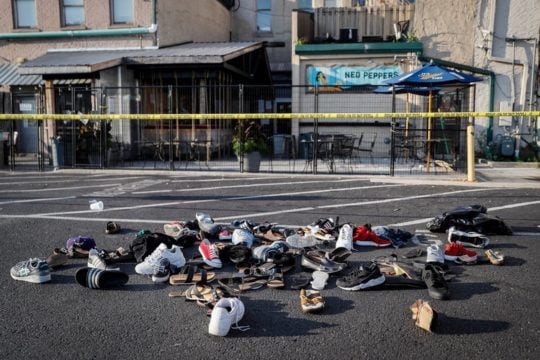 Following two mass shootings in the United States in less than 24-hours that saw 22 people murdered in one incident and nine killed in the other, Minister of Foreign Affairs Darren Henfield yesterday strongly condemned the violent acts and warned Bahamians travelling to the United States and other countries to be on alert for terror related threats.

In an interview with Eyewitness News Online, the minister said the Bahamian government and the people of The Bahamas mourn with the people of America.

“We join with them in condemning violence in all forms, especially such acts that we think may be founded in supremacy of one race over the other,” he said.

“And we will continue to do our part to work together,
as we have been doing in the western hemisphere, to counteract acts of violence and terror where we may find it in our region.

“We want to continue to say to the Bahamian people too that acts of violence of this nature happens to be apparently, unfortunately, the new normal.

“We want them to remain vigilant when they travel — not only to the United States of America, but to Europe or Asia or even our own region.

“If you see something, say something and always be aware of your circumstances.

“Look out for yourselves wherever you might be in the world.”

The foreign affairs minister, who said he has spoken with Bahamas Honorary Consul to Texas Lynden B. Rose, noted that the population of Bahamians or those of Bahamian heritage in Texas are predominantly located in Houston.

He said he was advised no Bahamians were impacted.

A mass shooting in Dayton, Ohio, around 1 a.m. Sunday left at least nine dead, including the sister of the shooter.

The shooter, who wearing body armor, was killed by police officers patrolling the area within a minute of him opening fire, according to U.S. authorities.

The incident took place just hours after another mass shooting at a crowded Walmart in El Paso, Texas.

Twenty-two people were killed and more than two dozen were injured.

According to authorities, most of the victims were inside the popular store.

The suspected shooter, Patrick Wood Crusius, 21, of Allen, Texas, was taken into custody.

Authorities were seeking to determine if the shooting, labelled a domestic terrorist attack, was racially motivated.

In recent weeks, Trump has been accused of racism following verbal attack on members of Congress, who belong to racial or ethnic minorities.

In a statement yesterday afternoon, the Ministry of Foreign Affairs said the government and the people of The Bahamas were deeply saddened to learn mass shootings and conveyed “profound condolences” on the tragic loss of life, while offering prayers for the injured to recover.

“Moreover, we stand with all right-thinking individuals in condemning all forms of violence, especially such acts that are founded in hatred and race supremacy,” read the statement.

“Our thoughts and prayers remain with our American brothers and sisters during this distressing time.”

Asked whether the government intends to issue a travel advisory on the U.S. following the three mass shootings in the just over a week, Henfield noted that instead of getting into an unproductive “tit for tat” this was an opportunity to caution Bahamian travelers.

He said his warning was primarily for Bahamians in The Bahamas traveling abroad to the U.S. and other countries where terror attacks and other violence incidents have occurred.

“We have spoken — the prime minister has and I have at our levels — to officials in the United States about the impact of these [events] upon us,” the minister told Eyewitness News Online.

“We don’t see this as an opportunity to pile on.

“We see this as an opportunity to say to our people to be cautious, be careful where you travel; not only to the United States, but anywhere in the world. I don’t know that advisories, even though issued, you know, tit for tat; I don’t know that it is productive in any means.

“These are very unfortunate incidents of gun violence and apparently linked with supremacy of race and that we condemn as a people and as a country, and that’s as much as I’d like to say.”

National debate was sparked on whether the Bahamian government should issue a travel advisory after a Bahamian man — Harold Williams, 56, — was stabbed in the face at a cafe in Pembroke Pines, Florida.

According to the Pembroke Pines Police Department, Williams entered the café to use the restroom and as he walked toward the rear of the establishment, an employee stabbed him in the cheek with a knife.

At the time, Henfield said while the issue bore some greater importance given what he called the constant attacks on public safety matters by U.S. officials about The Bahamas, the minister said the government had no plan to issue a travel advisory on Florida.

He said Bahamian citizens, however, should always be alert anywhere in the world where they can be subjected to types of instances and events given the nature of the world.

Contentious debate continues on gun rights and gun control in the United States.

On July 28, a lone gunman wielding an AK-47-style rifle killed three people, including two children, and injured 13 others at a food festival in Gilroy, California.

The motive for the shooting was unclear.