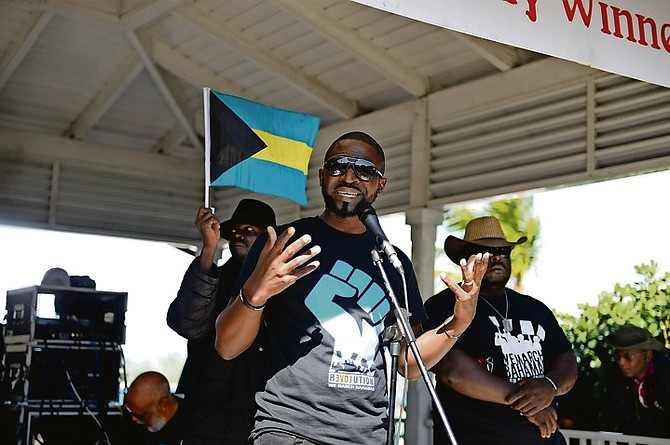 While a handful of Bahamian activists have taken the lead in protesting a number of controversial issues currently plaguing government, many have questioned why vocal We March Bahamas activist turned Senator, Raynard Henfield, has chosen to remain silent.

That question was answered via a six-paragraph statement published on Henfield’s personal Facebook page Sunday.

Henfield confirmed that he will still lead the We March movement but advised his followers, that he intended to seek resolve to national issues in a fair, balanced and non-controversial approach.

“We can live for conflict or we can live to co-create,” Henfield wrote.

Henfield released his statement in response to a number of Bahamians that contacted him over the weekend to share their opinions about how he should approach and fight current social injustices and national issues.

Popular Bahamian internet sensation Cindy Daxon of Grand Bahama was one of them.

“On Saturday I got a phone call from a lady who introduces herself as Cindy Patrice Daxon. She said the spirit led her to call and remind me that ‘I am not to get comfortable in the Senate’, because my calling is to ‘lead our people’,” he shared.

“On Sunday, right after I got out of church I received a seven-minute voice message from Khandi Gibson of Families Organized Against Murder (FOAM). She reached out to tell me that she sees something in me and that whenever I am ready to lead, she and FOAM have my back.”

By midday Sunday, Henfield – who seemed agitated – penned his response to Facebook.

“In case anyone else wanted to remind me of who I am, I can assure you that I know who I am and what my purpose is,” he asserted.

“My banner at each We March read the same thing! I am prepared to work with everyone that wants to offer solutions with detailed plans, that will bring our people together peacefully and that will empower our people.”

The organization, led by Henfield, sought to keep fire at the feet of the PLP in an effort to make the government aware of the concerns of the electorate and provide possible solutions to national issues.

Henfield said since its launch, he has fulfilled every promise he has made to Bahamians.

He continued, “I stood in a chair in Rawson Square with a megaphone and said, ‘after this march I will organize a national think tank’ and I did just that. I then said ‘I would provide the solutions that came from that meeting.’ I did that when we marched on Majority Rule Day. I marched and presented those solutions.”

“On Friday Paul Lowe asked if I will lead the (We March) movement again. I said ‘yes.’”

However, his statement Sunday cautioned, “for those that want to continue your complaining, divisive tactics and mudslinging, you are on your own.”

Eyewitness News Online made several attempts to contact Henfield to understand what his next move would be and when the movement would kick into full throttle to address mounting concerns over the Oban Energy saga, unemployment woes and other national issues.