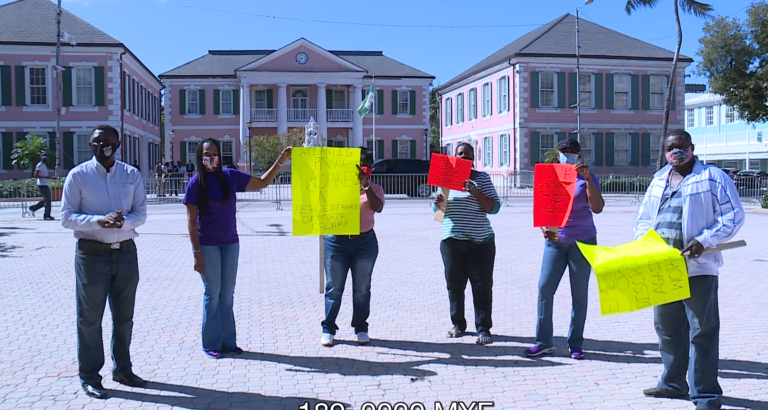 NASSAU, BAHAMAS — Several furloughed hotel workers protested in Rawson Square on Wednesday, once again calling on the Atlantis resort to pay out workers who want to be made redundant after nearly a year of the hotel’s limited operation.

Since the pandemic hit The Bahamas in March 2020, hotels have been closed temporarily or have had to limit operations, putting thousands of workers in limbo.

Second Vice President of the Bahamas General Workers Union Dave Beckford said the group is continuing its efforts to be heard after months of calling on the hotel to “free them”.

Beckford, who worked at the hotel for 26 years, insisted that the government’s COVID-19 emergency orders discriminate against the workers and favor the employer.

“You could request but nobody is hearing your cry,” he said.

“I am wondering…why is Atlantis continuing to hold workers hostage, in my view, who want to be redundant.

“Many hotel workers who are close to retirement, they have moved on; they have found something else to do to provide [for] themselves and their families.

“Give these people an opportunity because the law is clear as to what should happen.”

Beckford insisted if workers who want to be made redundant are given their just due, they could move on with their lives.

He pointed to other hotels that have made their employees redundant, including Baha Mar and Hilton, and urged Atlantis to do the “right thing”.

Eyewitness News revealed last week that more than 100 Baha Mar employees were recently disengaged as the resort continues to experience low occupancy and an overall decline in revenue.

The terminations came as the resort reopened its Rosewood and SLS, which is expected to see a return of a contingent of furloughed worker.

Leslie Humes, a now-furloughed landscaper who had worked at the Atlantis for 36 years, said he wants to be made redundant because he doesn’t want to “die on the job”.

He said before the onslaught of the pandemic, he had medical challenges and advised his employers of those issues and requested that he be made redundant, but that was denied.

“I told them that I prefer to go home than to die on the job because I see some of my friends die on the job. I asked them to make me redundant or fire me,” Humes said.

Arebea Bridgewater, a waitress at Atlantis for 14 years, said she is tired of waiting and just want clear answers on her employment and her future.

“I’ve been ask[ing] for the package. I was told that Atlantis is not moving in that direction and that they are trying, want to save jobs,” Bridgewater said.

“I’m one of the thousands that have been asking and we’re not getting any clear answers as to when I’m going to be called back to work, how long I have to wait. Unemployment benefits already dropped from $400…to now $200…

“I am tired waiting. I would like to be paid my package so I could move on.

“I feel like we are being held hostage because you will be forced to leave. If you resign, you leave with nothing, opposed to making me redundant and you will be paid off your 12 years that you are owed.

“Why is it that we cannot get any answers as to why we can’t get our redundancies packages?”