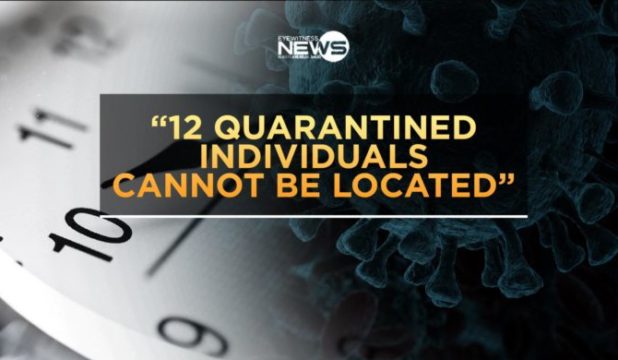 NASSAU, BAHAMAS — Twelve quarantined individuals who were exposed to the novel coronavirus (COVID-19) cannot be located, health consultant in the Office of the Prime Minister Dr Dahl-Regis revealed today.

According to Dahl-Regis, the 12 individuals had past the 14-day quarantine period, but had not been retested to verify their COVID-19 status.

Responding to questions from Eyewitness News during a broadcasted press conference, Dahl-Regis said there were fewer than 250 people who remain in quarantine, down from the nearly 800 people reported just over a week ago.

She said: “Many have graduated out of quarantine. Twelve of that number we have not been able to find.

“That’s the specific numbers. With regard to the electronic monitoring, we are in the process of signing a contract for the use of an app for verification of quarantine, which draws a perimeter around the quarantine site and then sends an alarm should there be violation of that perimetry.

“We are coordinating this with surveillance units, Royal Bahamas Defence Force, and law enforcement agencies and we hope to do the same in all islands; not only in New Providence.”

She added: “Every effort is being made in order to contact them and we will continue to do so.”

When asked whether contact has been made with law enforcement about the quarantined individuals that had not been located, Chief Medical Officer Dr Pearl McMillan said addresses and contact numbers are obtained for those who have had potential exposure, but at times, those addresses may not be exact, and the phone contacts may not be listed.

She said moving forward the software the Ministry of Health intends to acquire to monitor quarantined individuals will assist with contact tracing efforts.

Noting that at one point over 1,000 people were in quarantine, McMillan said: “Twelve of that number is not so bad, but we will enhance our capacity and put in place stronger measures”.

Prime Minister Dr Hubert Minnis recenrlt announced that individuals in quarantine who breach the requirements could be fined $20,000 and/or imprisoned for five years.

Health officials have previously expressed concerns about the number of people who were asked to self-isolate and self-quarantine not following the guidelines, noting the status-quo “is no working”.

As the number of people in self-isolation increased last month, health officials said there were discussions about the use of an electronic wrist band that could monitor those affected remotely.

As of April 9, there were 344 people were in quarantine.

Countries included South Korea, which had over 30,000 people in self-isolation as of March, launched a smartphone application that could monitor citizens on lockdown.

Hong Kong made a similar move, introducing electronic wristbands for quarantined people to wear in an attempt to stop potential asymptomatic “super spreaders” from interacting with the public.

Some person are not responsible