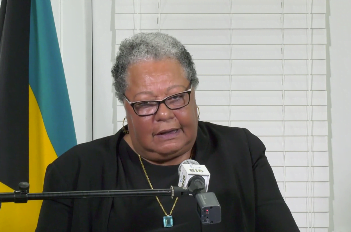 Dr Merceline Dahl-Regis, health consultant in the Office of the Prime Minister.

NASSAU, BAHAMAS — Health authorities have revealed they are still waiting to receive proof of COVID-19 testing from a group of Mexicans who arrived in The Bahamas today to assist with the reconstruction of hurricane-damaged Baker’s Bay.

According to an internal flight plan obtained by Eyewitness News, some 118 foreign nationals from Mexico travelled to Abaco for the reconstruction project.

The country’s policy mandates all foreign nationals must have a negative PCR COVID-19 test to enter the country.

When asked whether these workers were tested for the virus — a requirement for entry into The Bahamas — Chief Medical Officer Dr Pearl McMillan said there is a system in place for individuals seeking to enter the country, which involves making an application online for approval of a health visa.

McMillan said prior to July 1, there was an “application through another process that also required that persons who were seeking to come, provide, you know, evidence of a COVID negative test”.

She continued: “Regarding the question you have asked, this has come to our attention that, you know, it was potentially persons would have come into the country. We are in the process of seeking to determine whether or not this is actually so. And we are reaching out to the persons who potentially would be able to provide the information to us.”

She said: “There were supposedly a number of persons who would have sought to come into the country without having gone through the process.”

When asked for clarity, Dr Dahl-Regis, health consultant to the Office of the Prime Minister, said information was just recently passed on to her there was a landing of a group of nationals from South America and health officials were investigating.

However, Dahl-Regis assured that health officials will require from each individual who landed to present with a negative PCR test for the virus.

“If it does not meet the qualifications, we will do it,” she said.

“We will do the test to be sure that we have no transmission and if there is a positive test, we will deal with it.

Pressed on the testing for COVID-19 prior to the arrival of the workers, Dahl-Regis said: “We are told that they had and we await receipt of those tests, and once we receive them we will determine that they were good, valid — positive or negative.”

As photos of the group of workers emerged on social media, there was strong pushback from some quarters of the public — many of whom pointed to the high unemployment rate within the country.

The rate of joblessness has been projected to be around 35 to 40 percent, though the labor survey has yet to be completed to validate the figure.

As he wrapped up the budget debate in Parliament last week, Prime Minister Dr Hubert Minnis said Baker’s Bay $400 million expansion plan will continue over the next three years.

At the time, the prime minister said Bahamians make up 80 percent of the workforce at the property.

The PLP chairman said the chief medical officer should be well aware of the COVID status of the group before their arrival and there should be no questions about their tests.

He said this should have not happened.

Mitchell called on the prime minister to come forward and provide the full facts, adding that if there is has been another breach “heads must roll”.

Always a headline ahead, around the world, Bahamas, Bahamas news, ewnews, ewnews.com, Mexico

The fact that we dont know the covid 19 status of these Mexicans is very disturbing. Why were they allowed to come into this Country without proof of a negative test. As a Bahamian I have to provide proof. What in the world is going on !!!!!!

All of this is really enough to make anyone with good sense (notice I didn’t say common sense) angry. What have we opened ourselves to. They came into our country with not one MASK.
MASK IS A LAW ALL OVER THE WORLD
WHAT GAVE THEM THE FEELING THAT THEY DID’n HAVE TO RESPECT OUR LAWS OR OUR PEOPLE.