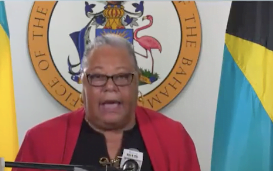 Dr Merceline Dahl-Regis, health consultant in the Office of the Prime Minister.

NASSAU, BAHAMAS – As dozens of people express concerns of inconsistencies and delays in testing, health officials advised that there have been some “mix-ups” that have resulted in delays in contact tracing and testing.

Dr Merceline Dahl-Regis, health consultant to the Office of the Prime Minister, sought to assure yesterday that those issues are being addressed amidst what seems to be several challenges.

Yesterday, Eyewitness News was inundated with reports of people expressing frustration over the surveillance team’s lagging protocols, including lack of follow-ups, weeks-long delays of test results, confusion over quarantine timelines and issuance of quarantine letters.

Jermaine Colebrooke, whose name has been changed to protect his identity, said he tested positive at the end of July, after having been exposed a week prior from a coworker.

Colebrooke said he decided to take a test privately because the Ministry of Health was taking too long to contact employees.

He noted he received his test results two days after taking the test and was placed in isolation.

He said he took a second test with the ministry 17 days later, but he never received the results back.

Colebrooke noted that he received a call on August 16 advising that he had been released from quarantine.

He said he never found out the results of his second test and could only assume he was negative.

Colebrooke said he received a release letter from the ministry, but it does not say that he has been released nor that he is COVID-19 negative.

A member of one of the uniform branches, whose name has been changed to Rashad Sweeting, said he was also among those who tested positive and have been waiting for protocols from the surveillance unit.

Sweeting said after being quarantined for 14-days, he was tested again in the first week of August and has been consistently calling the surveillance unit to receive the results from his second test.

“It’s now almost a month later and I haven’t gotten my results as yet,” he said.

Sweeting said the release he received from the ministry also did not indicate that he was negative. He said his employer requires that the negative diagnosis is included in the letter and attempted to request a change, but he has not gotten a response to date.

Michael Newman was a third person to come forward with the same concern, revealing he had been in quarantine after being confirmed positive.

He said he was advised nearly three weeks later that his second test came back negative and could be released from quarantine. However, he still has not received a release letter yet from the ministry.

Another man told Eyewitness News he had gone to a private facility to take a test, but the line was too long so he decided to leave.

He said that he received a call yesterday advising that he was positive, but he never took the test.

When asked whether there have been “mix-ups” amidst challenges of testing and contact tracing, Dahl-Regis said, “yes”.

“The missing data or the gaps in the testing lab data is very challenging,” she said, as she sought to explain the new data processing method.

“We often have to find other means to identify contacts.”

Dahl-Regis said there have been quite a few challenges with contact tracing.

“To overcome this we are proposing a call center for contact tracing, where we can invite the person who has been informed by the health team that they are positive,” she said.

“After the initial contact is made with the contact and the case, they will be able to communicate with the surveillance team.”

She assured that other ideas were being discussed including an app for contact tracing.

Dahl-Regis noted that in the first wave, 62 volunteers were recruited and 76 health staff re-assigned to carry out contact tracing on New Providence, Grand Bahama, and the Family Islands.

To date, public health experts working out of the contact tracing command center at the Melia hotel have engaged and followed up with close to 4,000 contacts of confirmed cases, she said.

The veteran infectious disease expert also advised that processing tests in the labs have also become a challenge with the sharing of information between the National Reference Lab, Doctors Hospital, Princess Margaret Hospital lab, and a few other private labs.

Labs are being recommended to utilize the digital entry of data at the time of swabs.

Sloan, I read your article and noticed that your article used names of actual people to hide the identity of the persons mentioned in your article. Did it ever occur to you that maybe those names are real names and some people can misinterpret your message by not clearly reading the article? I am Jermaine Colebrooke and I don’t like my name being used. Please remove my name from this article and I would like a public apology for this nonsense. A simple John Doe would have been sufficient.