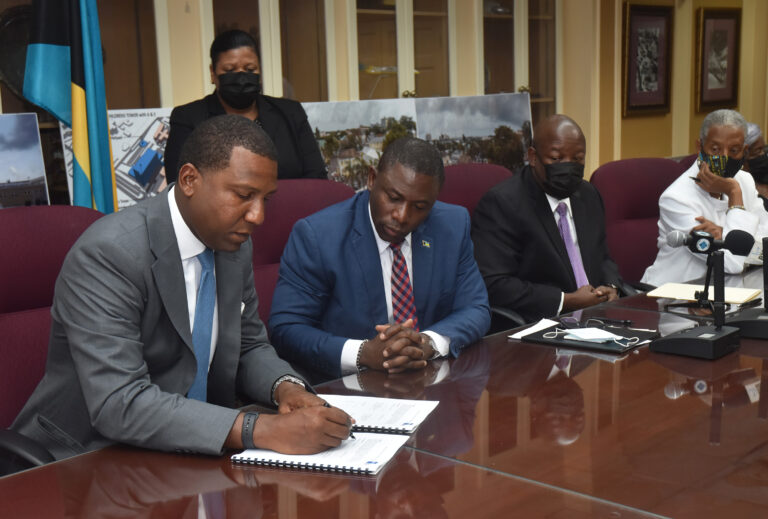 NASSAU, BAHAMAS — Just under $90 million is being invested to expand and upgrade Prince Margaret Hospital (PMH) and Rand Memorial Hospital, with a fast-tracked targeted 24 to 30 months’ completion timeline.

Health Minister Renward Wells, speaking at a contract signing ceremony for two agreements between the Public Hospitals Authority (PHA) and the Beck Group for the multimillion-dollar expansion of the two healthcare facilities yesterday, noted the Beck Group has a “solid track record” in partnership with the Public Hospitals Authority (PHA) in redeveloping public hospitals in The Bahamas. Most notably, the firm served as the lead designer on PMH’s Critical Care Block.

According to Fred Perpall, chief executive officer of the Beck Group, roughly 1,000 construction-related jobs could be created in the new expansion and upgrading process.

He further noted that on Grand Bahama, a new climate-resilient multi-story tower for inpatient care and auxiliary services at Rand Memorial Hospital will be constructed at a cost of $30.6 million. Roughly $5 million is also being invested in the infectious disease unit.

Perpall noted that planning for the works has already begun.

“Projects like these generally take nine to 12 months of planning. We are trying to reduce that by one-third.

“Our hope is that we can complete all of the works so we can occupy these buildings in 24 to 30 months.”

He added: “It is anticipated, based on volume, that the Rand Memorial will create 250 to 300 construction jobs. The Princess Margaret Hospital project at its peak will probably have 600 construction professionals.

“That does not include the local engineers and architects. You can average about 50 such persons on both projects.

“These projects should have a wonderful economic impact. Our goal is to ensure that we have a deep, collaborative process, as we have had in the past with local engineers and architects so that as we build these buildings we are also building people.

“While we are designing for the future, we are also transferring skills so that long after these buildings have been built, the skills required to improve our health system remain in the country.”