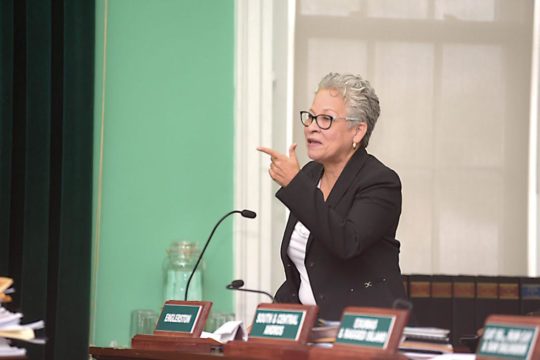 Member of Parliament for Englerston Glenys Hanna-Martin, blasted the government yesterday for choosing to remain silent on the Oban Energy saga – a move which she said, further underscores the government’s inability to lead with transparency.

She accused the government of doing business with a “cornucopia of crooks.”

“Why have there been no answers, to date, for the questions Bahamians have about this matter and where is the accountability to this lower Chamber?” Hanna-Martin questioned.

“The word fraudulent has now creeped its way into our national dialogue. Nowhere has that word resonated more than in the last several days where the country witnessed an alarming display for which the government has yet to give an explanation in what has now become known as ‘The Oban Debacle’.

“We have heard from Oban Executives, but we haven’t heard from our government as yet.”

Hanna Martin referenced a letter written by Oban Energy President Saptal Dhunna, which was sent to the Office of the Prime Minister over the weekend, that sought to clarify what took place.

The detailed letter explained that Dhunna was allegedly unable to make the signing and sent non-executive Chairman Peter Krieger, in his place.

Dhunna’s letter to the Prime Minister explained that he gave Krieger permission to sign in his stead and assured the government, “Oban Energies … hereby considers itself bound by the heads of agreement and is fully committed to progressing the project in accordance therewith.”

Despite the Dhunna’s assertions, Hanna-Martin said the nation needs to hear from the government why it chose to move forward with Oban for the proposed project for Grand Bahama.

Hanna-Martin spared no words as she passionately painted her view of Krieger.

“We have learnt that the foreign investors touted to invest in our Bahamaland are of dubious character. The face of the investment (Krieger) – we know that he has a conviction of fraud, he has been barred from the United States Securities Exchange Commission (SEC) for engaging in a number of activities,” she said.

“Krieger was seen on national television, seated next to the Prime Minister, purporting to execute a $5 billion heads of agreement, while signing someone else’s name.”

It was during the signing of that ‘ceremonial’ heads of agreement on February 19, that Krieger signed Dhunna’s name instead of his own name. The fraudulent move sparked widespread debate and criticism.

Hanna-Martin argued that the document which the government tabled in the House of Assembly, in recent weeks, is not the same document which was signed between the Minnis administration and Oban Energy.

“The document laid in this house, said to be the [agreement], is not the same agreement the country witnessed being executed in the formal ceremony where the prime Minister and his cabinet were. The document laid in this house, was apparently signed by someone else. It is alleged to be Mr. Dhunna, but I still question if this house and the country has been purposely misled,” Hanna-Martin said.

She further questioned why the Bahamas Environment Science and Technology (BEST) Commission was removed from the portfolio of Environment Minister Romauld Ferreira, and transferred to the PM’s portfolio.

“It is now at his feet, the Prime Minister, that we lay squarely the grotesque and unprecedented departure of standard provisions for the protection of our environment.

“The Prime Minister must also explain why such peculiar provisions have been agreed to, why our interest has not been guarded in this agreement, why are we in an inferior position with Oban and he must explain why the fate of the Bahamian people has been tied to this company in an unusual 90-year agreement,” Hanna Martin lamented.