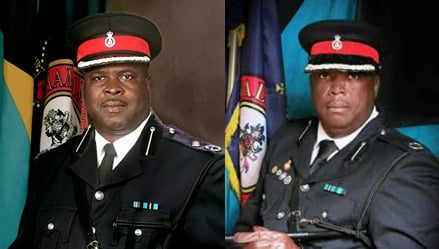 NASSAU, BAHAMAS — Outgoing Commissioner of Police Anthony Ferguson will hand over all instruments of appointment to Commissioner Designate Paul Rolle Sr. this afternoon.

Ferguson was expected to demit office before the end of March, though there was some uncertainty if the transition would be deferred amid the COVID-19 public health threat.

The official handing over ceremony will take place at 2 p.m. and will be broadcast live of the police force’s Facebook page.

More than a week ago, Prime Minister Dr Hubert Minnis said the handover ceremony for the new commissioner and the accompanying police ball had been postponed but would still occur.

Ferguson became the seventh commissioner of police in October 2017.

In his 40-year career, he served in numerous capacitates, including supervisor of the sexual offences and serious crime squads of the Criminal Investigation Department, head of the homicide squad of the Central Detective Unit, commander of the Drug Enforcement Unit and officer in charge of the Central Division.

As a homicide investigator, he was recognized for attaining a solvency rate of 81 percent.

Under his tenure as commissioner, crime has steadily decreased.

After years of record murders, the murder count declined to double digits in 2018 and 2019 — the first since 2010 when there where 94 murders.

He served as officer in charge of the Central Detective Unit and commandant of the Police Training Academy.

During his tenure at CDU, Rolle was instrumental in leading the successful conclusion of many serious criminal investigation and placing in excess of 2,400 cases before the Supreme Court.

He was made assistant commissioner in 2017 and established and led the Anti-Corruption Branch at its head.

As deputy commissioner of police, Rolle is in charge of discipline of the organization.

He graduated from the International Law Enforcement Academy, Roswell in 2010 with a diploma in advanced management; and in 2016 achieved a diploma in anti-corruption investigations and a certificate in criminal justice.

He is also a licensed minister and pastor at Golden Gates World Outreach Ministries.