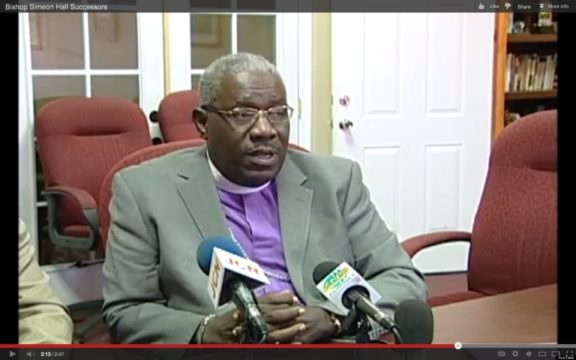 NASSAU, BAHAMAS – Bahamas National Commission of Marijuana Co-Chair Bishop Simeon Hall, suggested yesterday that government bureaucracy has contributed to a somewhat slowed pace of the commission, though he stopped short of providing specifics.

When contacted and asked whether the commission had produced a draft report, Hall pointed out that the commission was given a three-month extension to explore the issue of marijuana in The Bahamas and make its recommendations to the government.

“The April deadline was a bit ambitious and we have just been granted another three months extension on the duration of the commission and some of it is the bureaucracy of government, but we are working and the commission is doing [its part],” Hall told Eyewitness News Online.

“You know the mandate of the commission is to simply seek how the Bahamian people feel; what is their opinion of this matter, and that is all we are sensing.

“No one is saying — the commission does not have within its powers to say pro or con.

“What we are doing… is assessing how people feel.”

Pressed for specifics on the bureaucracy the commission has encountered and whether it has had an impact on the commission’s work, Hall said, “Well, no. It’s just I think how government work; they tend to work slow, and that’s the most I want to say on that.

“But we are moving ahead. In fact, there are six different subcommittees and one is meeting this evening.”

He added, “It is taking more time than we had envisioned and that is why we went back and asked for another three months to do more canvassing and to compile the information.”

A national survey on the issue on marijuana is expected to be released soon, according to Hall.

He said the result of that survey will be collated and presented.

The issue of marijuana and whether it should be decriminalized in the region was on CARICOM’s agenda.

The Regional Commission on Marijuana, established by the CARICOM Heads of Government, which presented its report to CARICOM in on the social, health, economic and legal issues on marijuana in the region, expressed the view that, in a regulated framework, marijuana should be treated in the same way as tobacco and alcohol.