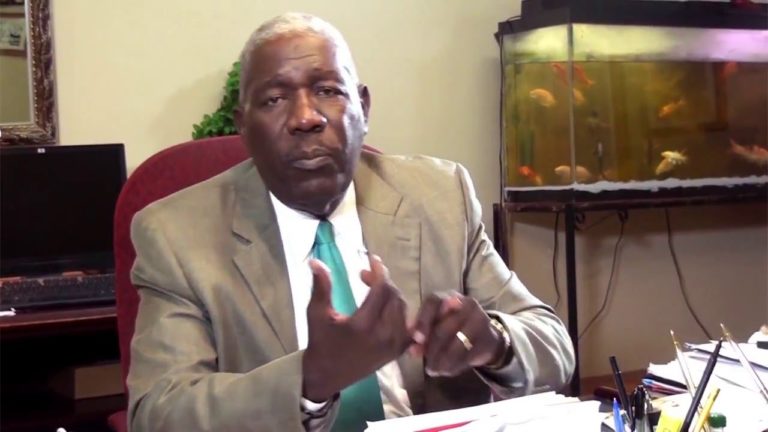 NASSAU, BAHAMAS — As the Bahamas National Commission on Marijuana (BNCM) prepares to submit its report to the government in a matter of days, commission co-chair Bishop Simeon Hall yesterday underscored the need to raise the level of national debate.

The pastor emeritus at New Covenant Baptist Church told Our News last week he received two death threats in connection with his work on the commission.

Hall declined comment on the threats yesterday, noting he did not want the incident to distract from the BNCM’s work.

“We should stick to the issue rather than naming calling and personality badgering,” Hall said.

“Let’s lift the bar on how we debate… The fourth estate has to lift the level of national debate. I think too often there is a dumbing down of national issues.

“We can speak to one another PLP, FNM without [insults] and that’s what happens. And the more we miss the post, me saying what I said, was that look how low someone people would go.”

He added: “I am not afraid of anybody, but it is dangerous because… sometimes I think people hear things and somebody says something bad about you, so somebody else comes and attacks you.”

Hall said there have been several occasions where people have verbally attacked or threatened him because of his stance on certain national issues in the past.

As it relates to the commission’s purpose, he said: “I have become the focus from I began this thing because people aren’t ready to accept a pastor on a marijuana commission and all I want to say is the marijuana commission was never put in place to push people taking marijuana as much as to see how to appraise ourselves as to how people feel about it pro and con.

“That is the mandate that government gave us, but now it has become a debate between Simeon Hall and [others] I don’t want that.”

Prime Minister Dr. Hubert Minnis has openly expressed his support for the decriminalization of medicinal marijuana and to expunge the criminal records of those who were convicted for small amount of the substance.

Commission co-chair Quinn McCartney has said the prime minister’s support will not influence the commission.

“I think he should have a say. He is a Bahamian. He is the prime minister,” Hall said.

“Basically, we are 90 percent finished with our report. We are restructuring it now and we will put it on the minister’s table in another couple of days.

Hall said: “I know I wasn’t [influenced by Minnis’ support] and I don’t think too many commissioners were at all influenced by it. I commend him for having the wherewithal to say how he feels and I think persons — pastors, politicians, pundits — whomever should be able to say, but… we are still saying what the majority feel about something and then what other feels, and then it is up to the government to make its findings and make its decision.

“The commission will not have the final word on this thing,” he added.