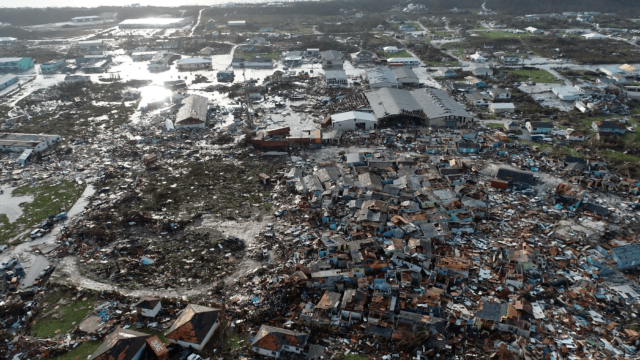 “There are a lot of people not sleeping in there,” said Joseph Baptiste outside the Kendal G. L. Issacs Gymnasium.

“They are not eating. They have a lot of stress and worry. People are crying throughout the night. A lot of them lost their children.”

Migrants interviewed by Eyewitness News Online spoke in Haitian Kreyol, and their words were translated by Rights Bahamas President Stephanie St Fleur and member Rosie Bethel. They were all undocumented and their names have been changed to protect their identities.

It’s been one month since the Category 5 storm washed away the life they all knew.

Their comments came as police reported that another body had been found in The Peas, bringing the number of confirmed deaths to 61.

Ahead of the storm, officials went into shantytown communities to warn residents to evacuate due to the severity of the storm.

Casandra Jacques said she evacuated The Peas with her husband and son when they were told.

They went to an apartment complex in Central Pines.

However, she said they were forced out into the storm when the roof caved in, crushing her husband. Jacques said those who knew how to swim pushed a refrigerator while she and her child sat atop it.

She said her son hasn’t seen his father since the storm, but he cries for him all the time.

Her husband had legal residency, and reportedly applied for her status before the storm.

She claimed her documents are ready but believes she will no longer be granted status due to his death.

Asked about her family in Haiti, Jacques said: “They crying because of the situation. The tragedy that happen, especially because how I’m here and my husband passed in the storm.

However, she added: “Haiti is worse than this”.

On Thursday, several migrants said this was not the life they envisioned when they took the perilous seven-day boat trip to the country.

For 23-year-old mother Jennie Pierre, the storm has now put her back where she was nearly two and half years ago.

Pierre said she paid a boat captain $2,500 in 2017 to bring her to The Bahamas, along with 30 other Haitian migrants.

She left her first child behind in Haiti in the care of relatives, and now has a one-year-old infant who was born in The Bahamas.

Pierre said they were dropped off in Eleuthera and she made her way to Abaco, where her husband was already working and living.

“The sea was rough and you had to be squashed in the boat.

“I’m afraid to go back. They having riots all the time and burning the country down.

“It doesn’t make any sense going back home. There’s nothing there, only more problems.”

Pierre worked in Hope Town as a housekeeper before the storm, and claimed she had started her work permit process.

Immigration law mandates the application process for a work permit must be filed from the applicant’s home country.

Pierre said her employer survived the storm, but she is unsure whether her application will be continued.

Her husband – who is also undocumented – is still in Hope Town assisting clean up efforts, she said.

On Thursday, scores of storm victims could be seen milling around, just trying to pass the time.

Many of them were evacuated from Abaco after their shantytown homes were flattened by Dorian.

The preliminary Abaco Shantytown Assessment Report, 2018, revealed that 41.1 percent of residents in shantytowns on Abaco reportedly held work permits as the legal ground for being in The Bahamas.

The report stated 70 percent of respondents in shantytowns in South Abaco had identified themselves as undocumented.

Rumors that immigration officials will begin sweeping shelters for undocumented migrants has intensified anxiety in the displaced community, Eyewitness News Online was told.

Pierre said she cannot go back to Abaco because she fears her baby will get sick without any functioning clinics or hospitals there.

She said she did not know what to do because she has no where to go and does not want to get caught.

If deported, Pierre believes her infant daughter will not be able to apply for Bahamian citizenship at 18.

She said she spends her days worrying and praying for herself and her child.

As of September 27, there were 1,041 evacuees being housed at the gym and three tents erected on the grounds.

However, migrants interviewed claimed numbers are slowly dwindling as they believe people who leave the property are being picked up by immigration and taken to the Carmichael Road Detention Centre.

“I am afraid to leave the property,” said Wilson Jean.

“People go missing from the shelter everyday. Once they leave, they don’t come back.”

Jean continued: “They are apprehended in the streets, even ones who have bands on from the shelter. When they don’t have stuff, they would go to the market to try to get some stuff and they get taken.”

In an address to Parliament on Wednesday, Prime Minister Dr Hubert Minnis said he told the International Organization for Migration the country’s laws on “illegals” will be carried out in a humane manner.

Minnis warned migrants to leave or be forced to leave.

A few days earlier, Attorney General Carl Bethel advised work permit holders who have lost their jobs due to the storm to “go home”.

But with intense poverty in Haiti and ongoing political unrest, migrants told Eyewitness News Online going “home” is not an option.

Cynthia Henry, a mother of one and grandmother of two, said she understands her nephew was apprehended, and there’s nothing anyone can do for him.

Henry said she hasn’t had a work permit since 2013 when her former boss died.

His daughter had promised to apply for one after he passed but the family suffered financial challenges and Henry was left to figure it out on her own.

Henry’s 32-year old daughter only holds a work permit and a promise from her Abaco employer that she can come back to work when conditions normalize.

As for Samuel Dacius, he said his work permit expired on Thursday.

“The storm just happened and we lost everything,” Dacius said.

“If the government could at least give us a chance to function before they deport us. We were living and surviving in Abaco, but now we have nothing.

“I have no problem going back to Haiti because that’s my home. But it’s just that I don’t have any support or anything to take back home.”

The need to take over the rich that have been squeezing them for decate while they have to leave their country.

Whatever you do just be careful of what you doing: and don’t you ever forget that , Haitian people is the greatest nation on earth who were called by God to despise colonies to end up slavery.

The only way someone can over come to every means by showing love at every levels to the strangers into your huose : God is the only the alpha and the omega : also helping the others while someone else helping you.
Watch the game and watch the puzzles how they playing : the message is clear, and so ,who kills all Haitians in the Abaco island? ?????????
Dorian storm is not responsible for Haitians deaths in abaco.

The world needs to come together to end the suffering of all.These corporations that have raped the natural resources of what is termed as (the poorest places are actually the richest places) must be held accountable.So much greed and corruption.Everyone should have at least the basics to survive.We all want to live and not suffer !

There is no group of people’s fault,that Hurricane Doren destroyed those two islands .Where ever Doren landed there would have been catistrofic damages.The Bahamas has imagration issues just like the United States and other countries who accept refugees.That coyntry needs to heal .This means sticking together as a country There are many foreigners who have setteled there .The cleanup process is hugh and plenty help.is needed.The settelers should be allowed.to stay and help rebuild the country that they risked their lives to come to in order to have a better life. The hatians are not the only illegal people there.There are Chinese people there Jamacians,Cubans to name a few.So leave the Hatians alone for God’s sake,Who is not legal, give them ststis and God will heal the land.