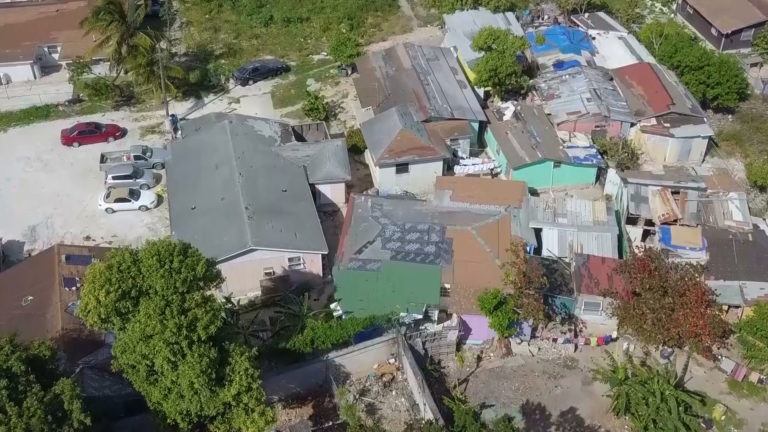 An aerial view of part of one of the shanty towns on New Providence.

Haitian pastors are concerned that displaced Haitians will have nowhere to go once shanty towns in the country are destroyed come July.

In an exclusive interview with Eyewitness News Wednesday, Minister Marcus L. Petitjean, a pastor of Haitian descent said, “some Haitians in the community have prepared already but, I think for a lot of persons, with three or four kids, can’t find money to buy a piece of chicken … just imagine them trying to find first, last and security to move.”

Petitjean – whose parents are both Haitian – expressed his disappointment in the government, and accused it of not showing more compassion towards a community that was very influential in voting it (the Free National Movement (FNM)) into power.

“We are just a year into this new government and these are the same persons who voted for you and you have no compassion whatsoever.”

The Bahamas has turned out to be a refuge for many illegal Haitians said to be coming in search of a better life.

Concerned Haitian resident Lorvaine Pierre-Miller, who is said to be her legally, also shared her concerns with Eyewitness News, highlighting the fact that Haitians only want a better life.

“They came for a better way,” Pierre-Miller said.

“At the end of the day, this is The Bahamas and the government can do what they want, but I just would like them to try and help the people … maybe provide a housing community for Haitians, because legal Haitians also live in the shanty towns.”

While the Haitian Community may be upset about the new deadline, Pastor Joseph however, praised the government for approaching the matter more strategically.

“They went to the town and they counted the people and see how many houses.  I believe the government is doing a good job with this and not just putting fire under the people,” Joseph said.

However, he said the community is very much up in arms about the deadline because many of them have work permits and some of them are permanent residents. Further, he said, “some have passports.”

Joseph also pointed out the fact that Haitians – legal and illegal – contribute to the Bahamian economy, as they spend in the grocery stores just like Bahamians.  He wished the government took this into consideration as well.

“These people are useful … even those businessmen who have their food stores feel the impact of money spent by Haitians.

“If you make all of them leave without helping them, the grocery stores will feel that also,” he noted.

Pastor Dr. Jean-Paul Charles, president of the Haitian pastor community said, “in the Haitian community, as a Pastor, we have to give them good advice but, at the same time we need money.”

The Haitian church community has already put in place committees where they collect money from congregation members to assist those migrants needing financial assistance. But according to Pastor Dr. Jean-Paul Charles, they still need more.