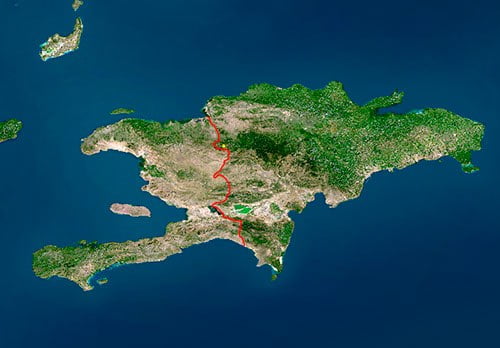 An aerial view of Haiti.

NASSAU, BAHAMAS — Haiti has emerged as the “outbreak hotspot” among CARICOM members with the vast majority of new COVID-19 cases among member states stemming from The Bahamas’ southeastern neighbor.

Four more COVID-19-related deaths were confirmed in Haiti yesterday, brining the total to at least 30.

Haiti has become the first CARICOM country to record more than 1,000 cases of the virus.

Secretary of State Communication Eddy Jackson Alexis said: “We must change our behavior today. If you have symptoms related to COVID-19, fever, dry cough, fatigue, contact a healthcare professional urgently.”

The ministry said there were more than 3,300 suspected cases while nearly 300 people were hospitalized.

In the last week, there were 426 new confirmed cases of the virus among members states and associate members of CARICOM.

Three-hundred and six-two of those cases were confirmed in Haiti.

The remaining 74 cases were reported in the Cayman Islands (26), Jamaica (20), Guyana (12), Barbados (five), Bermuda (four), Bahamas (three), the British Virgin Islands (one), Grenada (one), St Vincent and the Grenadine (one) and Suriname (one).

In its May 21 situation report, the Caribbean Disaster Emergency Management Agency (CDEMA) said: “With596 confirmed cases, 362 of these in the past week, Haiti remains the outbreak hotspot among the CARICOM members.

It said the “major outbreak” in neighboring Dominican Republic — 13,477 cases with nearly 2,300 confirmed in the last week — has compounded the situation in Haiti.

In its daily bulletin, Haiti’s Ministry of Public Health said the pandemic is “accelerating throughout the national territory” and the number of people infected in 24 hours for the first time exceeded 100 cases, reaching 105 cases.

The borders and airports remain closed in Haiti.

Cargo and commercial transport is ongoing.

The government was in the process of renewing the state of emergency measures.

A curfew is in effect from 8pm to 5am.

Access to public places is being limited to reinforce social distancing.

New measures were expected to be put in place to prevent direct contact and the spreading of the virus.

Natural disasters and widespread civil unrest in Haiti has seen increased illegal migration attempts from the country to The Bahamas.

The Royal Bahamas Defence Force has said it continues to implement measures to address the “threats and challenges of the influx of migrants from Haiti”.

She described the situation as a “perfect storm”.

“In addition, there is a real risk food insecurity will result in famine.

“Civil unrest… and precarious security may further complicate the situation.

“The health system in Haiti has limited capacity.”

She added: “There is real danger of a largescale outbreak followed by a humanitarian crisis in Haiti.”

Will the pm ask the ambassador to Haiti to return home. Well done royston.

What do u expect in Haiti a place where the majority don’t even have access to water to take a bath and sewage running in the streets people being dieing long before covid 19 yet the so call rich continue to abuse and pilfer the poor.