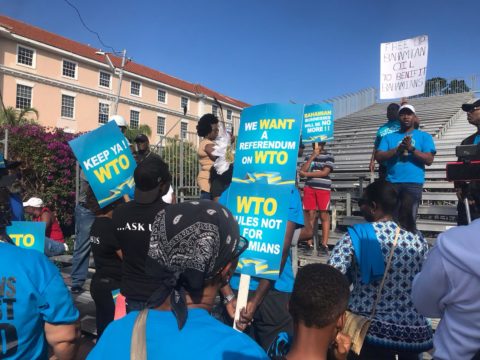 Holding a large banner that read: ‘Country first, say no to WTO’, more than 60 demonstrators marched from Arawak Cay to Rawson Square yesterday morning to protest The Bahamas’ accession to the World Trade Organization (WTO).

When the group got to Rawson Square, they met barricades and more than a dozen police officers lining the street.

At one point, one of the demonstrators squeezed past the barricade, but was quickly intercepted by an officer.

The pair had exchanged words before the demonstrator was escorted away, but later released.

When contacted, Chief Superintendent Bernard K. Bonamy Jr., the head of the Central Division, said there was a “misunderstanding”, but the man was not arrested.

Addressing the incident, Omar Smith, a committee member of the group, Bahamians Agitating for a Referendum on Free Trade (BARF), sought to restore calm.

“But, we are not here to fight against them, we are fighting for them.”

The government is seeking to complete The Bahamas’ accession to the WTO this year.

However, it has said even after The Bahamas potentially accedes to the WTO, there would be a five to seven-year adjustment period which would allow for the country to east into the tariff changes and other economic adjustments.

According to chief negotiator for WTO talks Zhivargo Laing, the former minister of state for finance under the last Ingraham administration, the offer to the WTO will require the government to forego around $40 million in annual revenue.

But Laing said the government should be able to make up the shortfall if the country’s offer is accepted by the global trading body.

Paul Moss, who leads BARF, said The Bahamas should be given the opportunity to grow organically as a sovereign nation.

“It is going to mean less job for Bahamians.

“It is going to mean more taxes for Bahamians and that is something we are running against right now.

“We say to all of you, go and speak to your member of Parliament.

“Ask them to explain what WTO means.

“I can assure you they will have difficulty because they do not understand it.

“They are under a whip and whatever that whip says, that’s where they go.

“We want to tell them today that they have an obligation to represent us.”

It commemorates The Bahamas gaining majority rule for the first time on January 10, 1967.

Dr. Denotrah Archer, founder of Citizens Against Bank Exploitation, said despite small numbers, it was important for Bahamians to begin a movement to ensure The Bahamas’ continued sovereignty, in much the same way as the country’s nation builders did so in the 1960s.

“This fight is for all of us,” she said.

“At the end of the day, we are going to have to deal with the repercussions and the things that happen when our government makes decisions for us.

She continued, “We have a liberalized hotel industry. How many Bahamians own major hotels?

“We have a liberalized banking system. How many Bahamians own banks?

Pointing out that WTO accession is a complex matter, Archer said the Bahamians should be concerned about developed countries and multinationals “divvying up what they see in third world and smaller nations”.

“Do we need that?” she asked protestors, who shouted resoundingly, “No.”

Colette Butterfield, an Andros farmer, said despite assertions from quarters of the public that yesterday’s demonstration was political, she said she was fighting on behalf of Bahamians who cannot or are too afraid to fight for themselves.

“We need to start being proactive and not reactive,” she said.

She said the demonstration was not political, but a stand for the nation.

“We are a small, fragile nation and if we allow these things to be shoved down our throats, we will never have a sovereign nation,” Culmer said.

“Why did we fight for Independence, to be free from [entities] like the WTO, the OECD (Organization for Economic Co-operation and Development), the European [Union] and the Financial Action Task Force.

“Whatever they want, they will throw right over you.

During a press conference of Wednesday, Laing outlined the goods and services offer The Bahamas made to the WTO and said it closely mirrors The Bahamas national investment policy.

“It reflects the sensitivities expressed in the consultations with various sectors such that certain sensitive sectors were taken off the table altogether — e.g. retail and wholesale, real estate, finishing work for construction, road transportation.”

Laing said all areas reserved for Bahamians under the national investment policy have been omitted from the services offer with the exception of restaurant services, limited to specialty, gourmet or ethnic restaurants or restaurant operating in a hotel; and certain construction services for which international expertise is required.

More details on The Bahamas offer to the WTO can be found on: https://www.bahamastradeinfo.gov.bs/