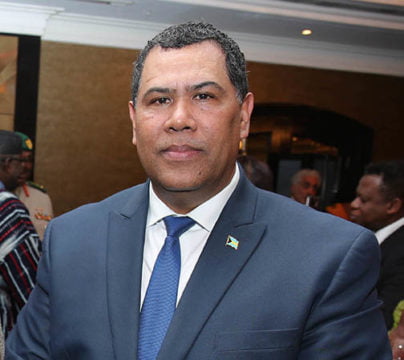 NASSAU, BAHAMAS – His Excellency Ellison E. Greenslade, QPM, High Commissioner of the Bahamas to the UK and Northern Ireland, who was recently dispatched to Italy to make further inquiries into the deaths of Bahamians Alrae Ramsey and Blair John, reported on Monday night that “good progress” is being made in the investigation.

“I am extremely pleased, as of this report, to tell The Bahamas that, subsequent to the family meeting this morning, extremely good progress has been made in this case. This is an ongoing and sensitive investigation and we should all be careful in the way information is disseminated,” said Greenslade, a former Commissioner of the Royal Bahamas Police Force.

Greenslade, who arrived in Italy on Saturday, June 8, is accompanied by his deputy at the High Commission in London, Mr. Wilfred Adderley and Mr. Christopher and Colin Wright, the uncles of Mr. Alrae Ramsey.

The bodies of both Alrae Ramsey, a Foreign Service Officer and Blair John, a Psychology Ph.D. student, were discovered by Italian authorities in waters of the River Po in Turin, Italy on Tuesday, June 4 and Wednesday, June 5, 2019.

Autopsies were  performed on both bodies on Monday, June 10, to determine the exact cause of death.

Greenslade confirmed yesterday that based on recent reports received from officials, these ‘external’ autopsies have been completed.

“I have not received the preliminary findings of the autopsies as of this report to you, but I anticipate receiving it very soon. As you know, the full autopsy – that is the very detailed autopsy – complete with toxicology reports, etc, will follow later,” Greenslade said.

Greenslade further revealed that on Monday morning, Colin and Christoper Wright was able to view the body of their nephew, Alrae Ramsey, and they were able to make a positive identification.

He also noted that on June 5, 2019, Ms. Brittany John was able to view the body of her brother, Blair John, and was able to make a positive identification.

Greenslade said since arriving in Turin, Italy on Saturday, he has been very satisfied that the investigation into the deaths of Ramsey and John are receiving the fullest attention of the Italian government and of law enforcement officials.

“…I am very satisfied that things are going in a very definitive direction, and based on the work that is being done by law enforcement, I believe that as the days progress we are going to be able to come back to the public and say much more, but I am satisfied that we are dealing with very professional people with a very high standard and I do believe that very, very soon we may be able to give a further statement,” Greenslade said.

“In 2018, Ramsey was granted an In-Service Award to pursue a one-year Postgraduate Diploma programme in Diplomacy/International Relations and Languages at the Diplomatic Academy of Vienna in Austria for the period September 2018 to June 2019,” the Ministry said.

“Blair [Rashad Randy] John, 28, a St. Augustine’s College graduate of the Class of 2009, was near completion of his Ph.D. in Psychology at Saint Mary’s University in Nova Scotia, Canada. He traveled to Turin to make a psychology conference presentation on behalf of the university.”

“Meanwhile, the Minister has also been in constant contact with the families of both men, pertaining to his Ministry’s role in the investigation. The Ministry of Foreign Affairs will keep the public updated as details of the investigation continue to unfold. And has asked the public to join in praying for the families, in the wake of such tragedy,” the Ministry’s statement concluded.

Yesterday, Eyewitness News Online was able to reach out once again to Cathleen Rahming, the mother of Blair John, who said that she was still trying her best to cope with her son’s demise.

“I am coping OK,” Rahming said. “I am surrounded by family and friends but I have my moments. It’s a roller coaster ride.”

Rahming said she remains in contact with authorities in Italy and she was aware that an autopsy had been conducted yesterday. She said that she was also aware of the Ministry’s efforts to ensure that the matter is fully investigated.

Attempts to reach family of Alrae Ramsey up to post time on Monday proved futile.