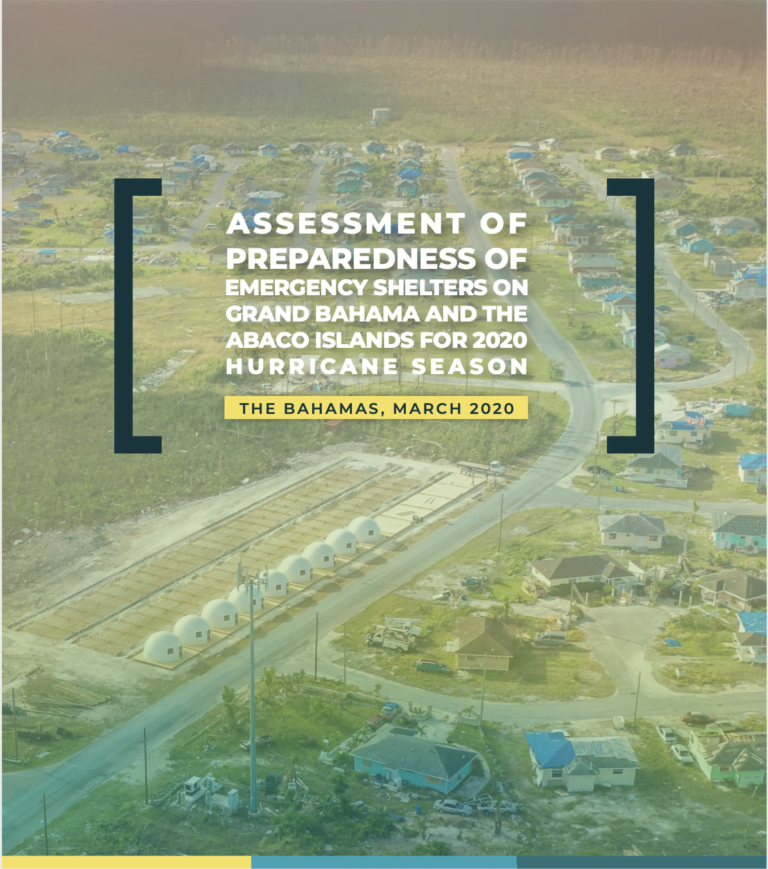 NASSAU, BAHAMAS — With less than a month before the start of the 2020 Hurricane Season, a new report from the International Organization for Migration (IOM) warns that the islands ravaged by Hurricane Dorian last year do not have adequate shelter capacity for the upcoming season.

The Assessment of Preparedness of Emergency Shelters on Grand Bahama and the Abaco Islands for 2020 Hurricane Season, obtained by Eyewitness News, examines the current condition of each emergency shelter, assess operational effectiveness during Dorian, and consider the suitability of each shelter for the 2020 season.

Of the 25 shelters commissioned prior to Dorian, 13 are useable and able to provide a capacity for just over 1,500 people or two percent of the population, the report stated.

The report, supported by USAID, also puts forth several recommendations to reduce disaster risk for the 2020 season given that the world is gripped by the coronavirus pandemic and focus is still primarily on recovery from Dorian rather than preparedness for the upcoming season.

The report calls on the government to prioritize the full repair of Central Abaco Primary, adding the capacity of 1,200 people;  and the repair of the three large schools gyms in Grand Bahama adding capacity of 1,500 people.

It further recommends the introduction of a shelter manager program; the creation of a thorough mass evacuation plan for the Family Islands; and the pre-positioning of some equipment at shelters.

Dorian slammed into Abaco and Grand Bahama on September 1, making a slow three-day crawl through the islands with wind gusts over 220 mph and storm surges up to 25 ft.

The Category 5 storm stalled over Grand Bahama, intensifying the storm surge and submerging 60 percent of the island under water.

The report noted that 25 official shelters, along with many unofficial shelters across two islands, were mobilised prior to Dorian making landfall and sheltered between 3,000 and 4,000 people.

“Capacity in emergency shelters was sufficient for those who sought it during Dorian,” the report read.

“However, due to people’s experiences, it is expected that next time there is a hurricane warning there will be a rush to evacuate the islands, regardless of whether that is the official advice, and there will be a far greater demand for emergency shelter.

“Current available capacity is likely to fall significantly short of demand, in particular if there is a major hurricane during the 2020 season whilst some shelters are still being repaired.”

The Atlantic hurricane season runs from June 1 through November 30.

AccuWeather meteorologists are forecasting another busy year with at least three major hurricanes when the season officially gets underway.

The 2019 season marked the fourth consecutive year of above-average activity in the basin and was tied with 1969 for the fourth most-active hurricane season on record, according to the weather agency.

Meteorologists forecast 14 to 18 tropical storms during this upcoming season. Of those storms, seven to nine are forecast to become hurricanes, and two to four are predicted to strengthen into major hurricanes.

While most of the structures were structurally robust, Dorian exposed vulnerabilities in the roofs, windows and doors.

Most of the shelters on both islands were schools, churches and community halls.

The report noted that although these facilities tend to be focal points of the community, many are too small and not recommended for longer-term shelters.

“The majority of shelters did not have their own generators, source of emergency freshwater, adequate sewage treatment facilities, first aid kits, fire extinguishers, flashlights, or sleeping equipment,” it stated.

“On Grand Bahama, much of this was supplied on a just-in-time basis from NEMAs warehouse facility in Freeport, but on the Abaco Islands the shelters were largely left to themselves to manage.

“…Very little food was supplied at the shelters, with most evacuees being encouraged to bring their own supplies.”

The Abaco Islands however had no nominated shelter manager, no defence force, no medics, no registration process, and “were left to fend for themselves”.

The report labeled the management of the shelters as “patchy”.

“There are a small number of very capable and dedicated emergency professionals, local administrators, community leaders and volunteer organisations across the islands who know exactly what needs to be done to ensure the shelters provide safe haven during hurricanes, but they are lacking resources and finance to be able to execute these plans,” it added.

“Many of these actions have the added benefit of doubling up as specialist capacity for COVID-19 if hospital capacity is stretched, and locations are required for quarantining or field hospitals,” the report stated.

“The IOM have the capabilities and resources to be able to deliver these projects and are looking for funding to make them happen as quickly as possible.”