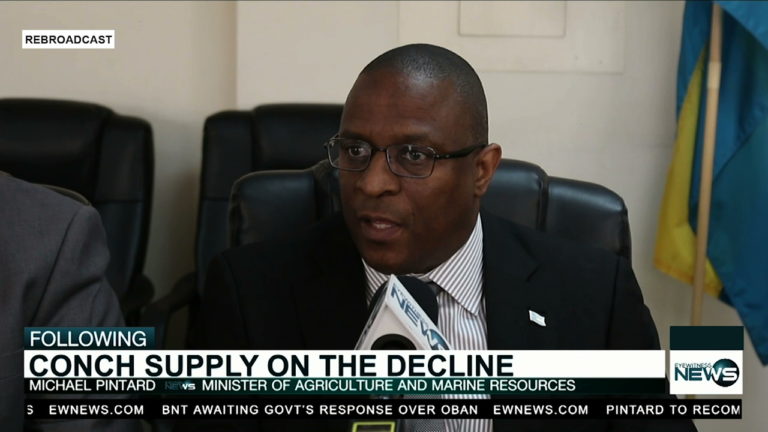 NASSAU, BAHAMAS – In the wake of a report which suggested that local levels of conch supply could be depleted within 10-15 years, the government confirmed on Monday that it has moved into overdrive to address the issue immediately.

“If things continue as they are I see problems, but we believe that if we respond right now that we can save the conch supply in The Bahamas,” said Dr. Lester Gittens, Fisheries Officer within the Ministry of Agriculture.

A number of years ago there were discussions about introducing a conch ban, but nothing materialized.

Then recently there was a resurgence of conch depletion awareness via a “conchservation” campaign.

But, now that things seem to be in dire straits; fisheries officials are sounding the alarm.

Dr. Gittens explained, in scientific terms, what it will take to get conch numbers normalized.

“The main thing with conch is that you need a certain amount of conch per unit area. You need at least 100 conchs per 1,000 square kilometres in order for them to reproduce adequately,” he explained.

“The studies that have indicated a problem haven’t said that there is no conch in certain areas it’s just saying that the conch [numbers] are below certain thresholds.”

Agriculture and marine resources minister Michael Pintard confirmed that the government will now engage in public consultation to chart the way forward.

“As early as this afternoon the persons who are in charge of Arawak Cay, Potter’s Cay and Montagu will be meeting with the leadership of their associations to get their representative who will sit on a coordinating committee to discuss the way forward,” the minister said.

“We expect that a number of key meetings will be held this week so that we will be able to solicit feedback and share information with various stakeholders.”

Local fisherman told Eyewitness News Online Monday that they are not opposed to the idea of conch harvesting regulations.

“I don’t think we have a problem with them regulating conch fishing; we just need to know when and how long they will want to implement it for,” Gregory Brown, local fisherman, shared.

Whether or not the government will impose a conch fishing season or a ban on fishing in certain areas; one thing that is certain is that stiffer penalties are on the way for poachers, those who over fish and others who illegally harvest undersized catch, Minister Pintard asserted.

“The fisheries act has been adjusted substantially, the draft is with the attorney general’s office and I expect it back in short order and it will then be taken to Cabinet and ultimately to parliament. So, there will be a number of adjustments being made in terms of fisheries laws within The Bahamas.