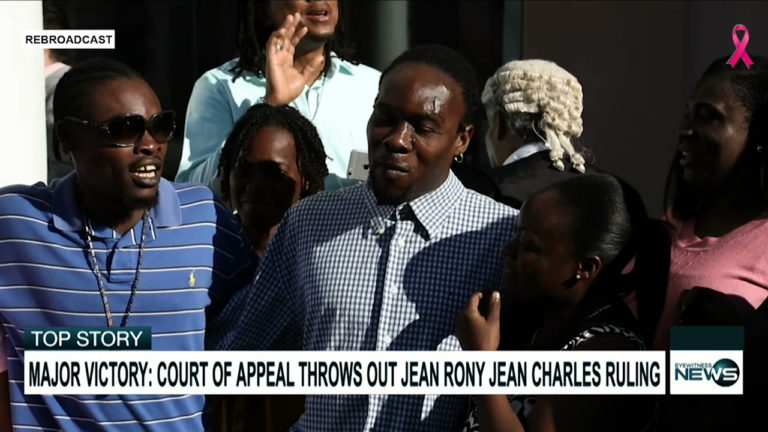 Yesterday marked a win for the Government after the court of appeal threw out a landmark decision by Supreme Court Justice Gregory Hilton concerning the controversial deportation of Jean Rony Jean Charles from the Bahamas to Haiti earlier this year.

The decision on what will happen to Jean Rony Jean Charles now rests in the hands of Immigration Minister Brent Symonette, according to Attorney General Carl Bethel.

Bethel told Eyewitness News in an exclusive interview that the Habeas Corpus application filed by Jean Charles’ attorneys were fatally flawed from the beginning.

Justice Hilton also found that Jean-Charles was deprived of his personal liberty, unlawfully arrested and falsely imprisoned. He ordered the government to issue a travel document to Jean-Charles to “allow and permit” him to travel from Haiti into The Bahamas, and that it pay the “reasonable cost” of Mr Jean-Charles’ journey “forthwith upon his return”.

Immediately following that ruling, the government filed an appeal on the grounds that Justice Hilton was wrong in law and principle, and overreached his Constitutional authority, but yesterday, that order was set aside.

“That initial ruling, any order made against the government, any kind of prohibition from any kind of conversation to determine the rights of anyone who may apply, all of those are out of the window,” the Attorney General said.

Jean Charles’ lawyer Fred Smith told Eyewitness News he is filing an appeal and taking the case to the Privy Council.

“It’s very important that the issue raised must be litigated to the highest court of the land because it raises important points. It’s never about the war, it’s that we must be better for human rights to be fought.”

Jean Charles was arrested by Immigration officers last September, but he was never charged with any offence under the Immigration Act or any other law. He was never served with a deportation or a detention order and had never been outside of the Bahamas.