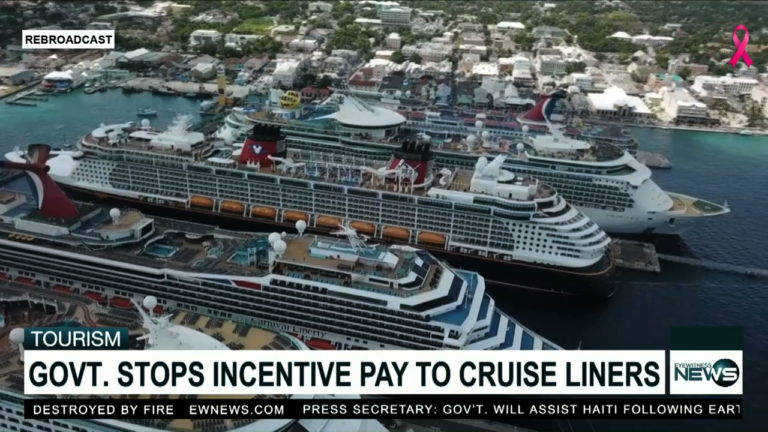 Government is expected to save on average $1 million per month, or $12 million annually after scraping incentive payments to cruise liners, said Tourism Minister Dionisio D’Aguilar.

The incentive payment to cruise liners was a policy agreement that had been in place for years, but the Tourism minister said it “no longer made sense” for the government to continue to pay when The Bahamas got so little in return.

“In the past we provided incentives, but to be honest with you we were paying for a lot of people who did not come off the boat so we are not paying,” D’Aguilar told Eyewitness News late last week.

“These cruise companies are very profitable, they make millions, why are we paying them to bring passengers here and then they don’t get off [the ship]?  So, it makes sense that if we are going to tie in an incentive we have to be more focused and more targeted in our terms and conditions.”

This move, he said, is in line with the government’s plan to redevelop the Prince George Dock.

Presently, the government is requesting proposals from interested parties and the deadline for submission is December 7th.

“Many cruise ports in the region have also been damaged by hurricanes and bigger and better cruise lines are coming out to sea, and we want to remain on top,” D’Aguilar said.

“When we finish re-development, I’m hoping more Bahamians can have businesses here. We want a better offering of goods and services so that the crew and guests will be more minded to come off the ships and spend more money.”

The Tourism Minister noted that at last report there were 91 cruise ships under construction and the Bahamas hopes to be in the top rank for ports of entry for at least a quarter of that figure.

He anticipates that work will be completed by 2022.