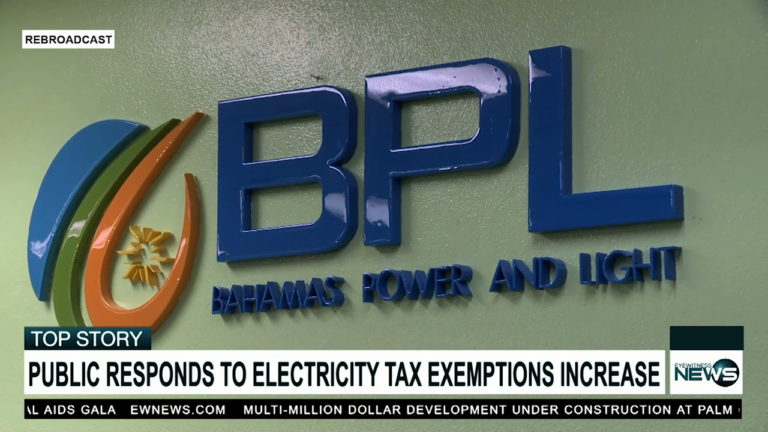 In the wake of the drastic increase in electricity bills, Prime Minister Dr. Hubert Minnis announced in Parliament Wednesday that government intends to temporarily raise the value added tax exemption ceiling on electricity bills to $300.

The initial exemption, when implemented back in July 2018 during the Fiscal Responsibility Bill, exempted all Bahamas Power and Light Bills under $200 from the 12 per cent value added tax increase. But Minnis said, “given the circumstances that has given the rise to the temporary spike in the fuel surcharge component of consumer electricity bills, government is mindful of the impact this increase has on all Bahamians, especially on the poorest and most vulnerable.”

Earlier this week, Bahamas Power and Light Executives explained that the drastic price hike in bills was due to the fire experienced at the Clifton Pier Power Plant. The Company had to rely on the Blue Hill Road Power Plant which uses a more expensive fuel, hence the increase in fuel surcharge and a decision to move an amendment to the law to allow a temporary increase in VAT exemptions from $200 per month  to $300 per month through the end of the fiscal year June 2019.

According to the Prime Minister, this is a deliberate policy initiative to assist Bahamians of modest means. He added that the new implemented exemption will show up on the January billing cycle. He said that the public will be informed of any decision made to extend the increased exemption ceiling into the new fiscal year.

“I requested the minister responsible for BPL and the BPL team to review and report back to cabinet on the full range of options open to the government to address this temporary spike in the electricity bill.

“And even as we execute the longer-term strategy to reduce energy cost in the Bahamas, I wish to ensure the Bahamian public that we remain resolute in the need for the country to substantially reduce its energy cost and the undue burden it places on Bahamian citizens and on the cost of doing business in the Bahamas,” Minnis said.

He added that the government will continue to explore the reduction of energy cost and will make a substantial transition to solar and other energy supplies. The public, he said, will hear about those strategies in the coming months.