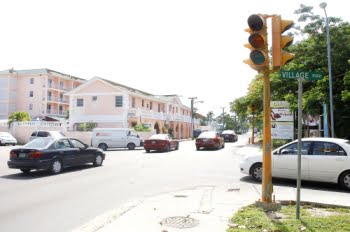 NASSAU, BAHAMAS – In an effort to implement  more “green” technology throughout the Bahamas, the government is expected to move a resolution in parliament to seek a $14.6 million loan from the Caribbean Development Bank to fund a Street Light Retrofitting Project.

“This project will facilitate the conversion of street lights to LED lights and the installation of a smart street light grid system with central controls,” said Minister of Finance K. Peter Turnquest, while delivering the 2019/2020 Budget Communication in the House of Assembly on Wednesday.

Turnquest said the Government will provide direct counterpart funding in the amount of $2.4 million for the full project value of $17 million.

Bahamas Power and Light will serve as the executing agency for this project.

This project, Turnquest said, is intended to reduce the cost of street lighting by 20 percent.

“In dollars, that translates into savings in the Government’s electricity bill of approximately $3 million per year over the next two decades. It also obviously represents a corresponding reduction in the demand for fuel and the foreign exchange outflows that accompany same.”

Turnquest said the establishment of a smart streetlight grid with central controls will allow the government to monitor conditions along the entire grid, including the ability to adjust lighting depending on overall system demands.

The finance minister said the government is seeking to provide more than $170 million over the next 8 to 10 years, to introduce commercial scale solar energy opportunities throughout The Bahamas, with particular emphasis on the Family Islands.