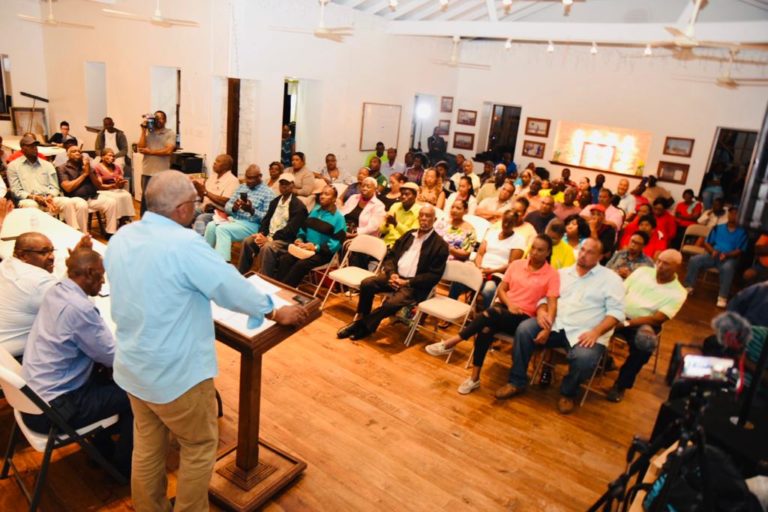 120 to be employed during construction, 150 permanent jobs to be offered

NASSAU, BAHAMAS – The Government of The Bahamas has signed a heads of agreement with Disney Island Development Ltd for a proposed cruise port and entertainment facility at Lighthouse Point in Bannerman Town, South Eleuthera.

The signing took place last Thursday at the Cabinet Office but private media houses were never notified and were only made aware when a statement was released from the Office of the Prime Minister on Sunday.

Eleutherans, however, were notified of the agreement on Saturday when Prime Minister Dr. Hubert Minnis made a visit to Tarpum Bay, Eleuthera, to update residents on the government’s mid-year budget statement and the 30th Inter-Sessional Caricom meeting recently held in St Kitts and Nevis.

“So, Disney is on its way here to do things here in your island and during that discussion — putting together a heads of agreement — what was shocking to me is individuals were requesting benefits and things for Nassau,” the prime minister told residents.

“And when I saw it, I said you have to be crazy.

“This is an Eleutheran project, this is not for Nassau.”

The prime minister’s statement received much applause from the audience.

According to the prime minister, Eleuthera must benefit the most, not Nassau, and the government must move away from being Nassau-centric.

“We are one Bahamas and every island will rise, not Nassau alone. We will all rise together or we fall, the prime minister told residents at Saturday’s town meeting.

Meanwhile, a statement released Sunday from the Office of the Prime Minister (OPM) outlined that the proposed development has a projected investment of between $250m and $400m and thus far, Disney has completed the acquisition of the property from the private seller.

“Approximately 190 acres of the land purchased from the private seller, including the southernmost point of the property, will be conveyed to the Government of The Bahamas for conservation and a national park. The appraised value of the land donation is $6.29 million,” the statement read.

Core elements of the proposed project include low-density development and sustainable design, public access and economic opportunities for Bahamians.

Under the agreement, Disney Cruise Lines (DCL) will ensure a minimum of 120 Bahamians will be employed directly during the construction of the project.

Disney also has committed to aim for an overall ratio of 80 per cent Bahamian workers to 20 per cent non-Bahamian workers during the life of the construction phase of the project. This is subject to qualified labour being available and the need to ensure the highest level of technical compliance with international standards.

DCL will also create as many as 150 permanent, sustainable jobs with health benefits in a range of positions for Bahamians once construction is completed.

The development will also provide a variety of entrepreneurial opportunities for residents of Eleuthera and Bahamians in general.

DCL will partner with agencies to develop training and professional development programs, including the LIM Maritime Academy, Access Accelerator (Small Business Development Centre) and the Hospitality Institute of the University of The Bahamas.

Space must be provided for Bahamian vendors on the property for the sale of authentic, high quality Bahamian retail goods, services, souvenirs, arts and crafts, Bahamian T-shirts and other merchandise.

Disney must also give priority to Bahamian owners and operators to provide port adventures for DCL guests while its ships are in port, and will seek to use Bahamian entertainers.

Other elements of the project include the integration of Bahamian cultural and artistic expression into the design of the site and experiences offered.

Disney also will provide all citizens and residents of The Bahamas with access to the property for non-commercial purposes and will collaborate with Government and local communities to meaningfully contribute to initiatives that meet community needs, with a special focus on children and families.

This includes assisting with local schools, assisting with identifying and enhancing tourist heritage sites in South Eleuthera and exploring opportunities to improve medical facilities that serve the residents of south and central Eleuthera.

Construction of the project will not begin until the Environmental Impact Assessment and Environmental Management Plan are reviewed and approved.

“The Government of The Bahamas is satisfied that it made the best decision in the interest of the Bahamian people, a sustainable future for the people of Central and South Eleuthera and the economic development of the country,” said Dr. Minnis.

“The implementation of this project supports the government’s plan of expanding the economy of our country and economic opportunities for our people by promoting development in the Family Islands.”

The government said it notes Disney’s record of environmental stewardship and will ensure that the project is implemented in a manner which safeguards the environment and is in the interests of the people of The Bahamas.