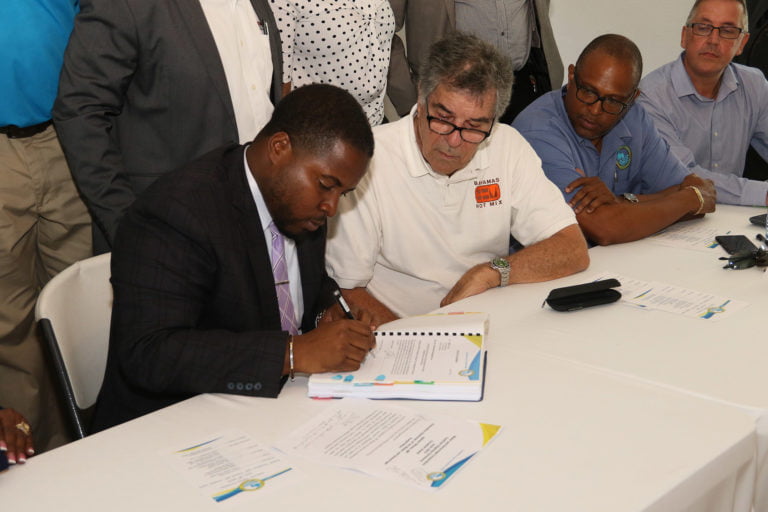 CROOKED ISLAND, BAHAMAS – Residents of Crooked Island clapped their hands gleefully and burst forth exclamations of praise during the contract signing ceremony to supply potable water for the first time in several settlements on this remote island.

Local residents of Crooked Island are expected to be employed on the project that also offers opportunities for females to work as required by CDB terms.

Mr. Andrews said skilled operators are needed but the majority of hires will be trained on the job.

In his remarks, WSC Chairman, expressed excitement as the government provides a potable water distribution to Crooked Island.

“We recognize that all of Crooked Island will not benefit from this initial project but this government is committed to providing the entire island with a potable water system; so we intend to expand the system as far and as fast as the budget will allow,” said Mr. Gibson.

He responded to some of the concerns expressed by Mr. Daxon, on behalf of the residents, in his welcome.

“I understand his passion,” said Mr. Gibson. “I feel the same way about my island. The corporation will also be purchasing a Reverse Osmosis plant to address your concerns because of water production.

“Limited budgets can only do some things at a time. Start at one point and over time you build on that until you get to where you want to be. I agree, access to potable water is a universal right. All of these islands should have potable water. It is unfortunate that it happened. We’re doing our best to address it.  He who feels it knows it.”

Mr. Gibson remarked that because The Bahamas is located in a hurricane zone the proposed water systems have been designed so that they are robust to climate variability and climate change. He said engineers have identified potential climate change impacts along with the appropriate adaptation measures.

He explained that pipelines along roadways which are adjacent to the sea will be laid at a depth of 4 feet, rather than the standard 3 feet and will be installed on the opposite side of the roadway from where the sea is.

Studies have been carried out to identify areas that would be under water if Crooked Island is impacted by a storm of high intensity.

Mr. Gibson expressed thanks to the Hon. Desmond Bannister, Minister of Public Works; and to the Most Hon. Prime Minister Hubert Minnis for their support. He also acknowledged the following:  the CDB, Julius Bonaby and the staff of the Family Island Department of WSC in Crooked Island; engineers in the Project Management Unit; and N.O. Whyte and Associates for their technical assistance and project management.

He assured residents in the Family Islands that the government will do everything in its power to ensure a safe and reliable water supply to residents.

“This government is keenly aware of the needs in the various Family Islands and we are currently formulating plans to address them,” he said.