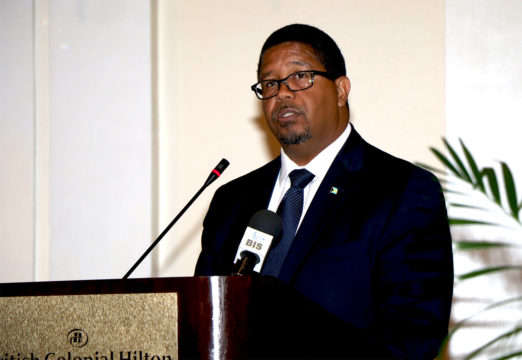 The Bahamas Development Bank (BDB) has three years to completely wean off of the financial assistance of the government according to Deputy Prime Minister and Minister of Finance Peter Turnquest.

The mandate came at a press conference held at the BDB Thursday where Turnquest said the bank’s board has already been notified of the timeline.

“As the bank strengthen its portfolio, I have instructed the board of directors to ensure that the bank arrives at a point where government support is no longer required,” Turnquest explained.

“The chairman can tell you, we are very serious about that and we’ve given the bank a three-year mandate to wean itself of government support.”

The move means a more efficient bank and aggressive bank in terms of engaging in profit making initiative according to Turnquest.

“ …Profit in this instance means getting a return on investments we make such that we can invest more into the small business sector to create even more economic activity,” he said.

“Profit maximization is not the primary mandate, but sustainability most certainly is.”

“The aforementioned financial results demonstrate that the bank is on the right track and they provide further justification for the government’s continued efforts to resource and support,” the finance minister said.

“We are taking consideration of adding to the bank, its ability to assist the government in its debt collections and management of delinquent loans from other entities, which will provide the bank with another opportunity for the bank to create another stream of revenue as well as to assist us.

“The government overall to reduce the cost involve in debt collection, in asset management and in bringing to a successful conclusion, so of the interventions we had to make in the quasi-private and private sector.”

Chairman of the BDB Lindon Nairn concurred stating that the 43 per cent decline in losses reflected the bank’s goal of restructuring.

“The improvement mainly reflects aggressive and consistent efforts by the bank to liquidate underlying loan collaterals and to restructure loans,” Nairn confirmed.

Nairn also stated that while the bank is doing well, it will continue to lobby for a leg up from the government when available.