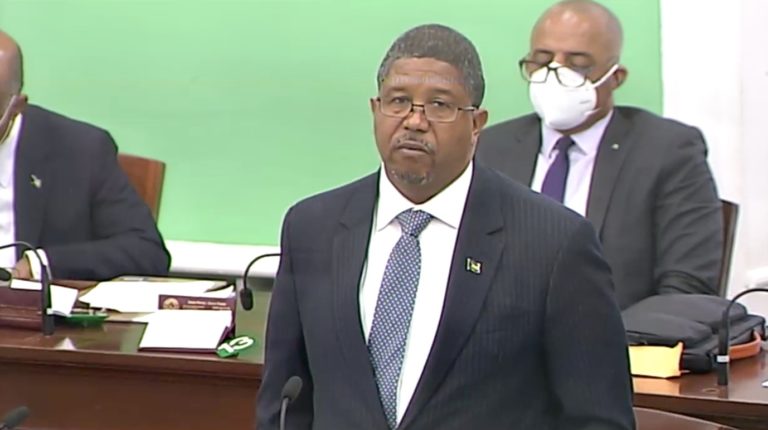 As he delivered the 2020/2021 budget communication, Turnquest pledged there will be no tax increases or “draconian cuts” despite what has been described as the worst slowdown in modern history.

He noted the scope for significant reductions is marginal, given the economic situation facing The Bahamas.

Turnquest explained the government is pressed to take a conservative approach to government revenue taxes, and it will deliver “a guided and focused package of relief measures and incentives”.

He announced government will provide a back-to-school value-added tax (VAT) holiday on school supplies, clothing and select food items for the two-weeks leading to the reopening of schools.

The initiative is expected to provide millions of dollars in saving to parents.

“I would note that the tax exemption will only apply to items that are bought inside the country and not those that are imported directly into the country,” Turnquest said.

The government will reduce the duty on fishing materials from 45 percent to 20 percent, effective July 1.

These items will include fishing rods, reels, lines, tackles and other items.

Similarly, duty of farming equipment for the use of backyard farming from 25 to 10 percent.

In an effort to spur construction activity, duty on a wide range of building materials will be reduced to 20 percent.

Turnquest said the government is forgoing millions in revenue from the continuation of Hurricane Dorian relief measures for the first half of the year, and it will provide an extension of tax incentive to help sustain employment and strengthen the domestic economy.

He said special economic recovery zones, which exempt value-added tax and duty in the hurricane-impacted islands of Abaco and Grand Bahama, will be extended from December 2019 to December 2020.

All concessions on the applicable island will be extended to cover the period January 2012 to June 30 2021.

The country’s domestic economy remains stalled due to the novel coronavirus pandemic.

Turnquest announced that duty of personal protective items (PPEs) and gloves will be exempted for one year to ensure healthcare workers are protected during the ongoing fight against the pandemic.

Duty is will also be reduced on items to encourage green technologies and plastic elimination, according to Turnquest.

The government will also expand the tax-free transfer of land where there is no change in beneficial ownership.

Notwithstanding the duty and tax reductions, Turnquest said to help to achieve its medium term fiscal goals it will implement revenue enhancement measures, mainly on non-essential goods.

A recent review of the government’s existing fee structure has resulted in a “small increase” in fees related to storage fees at customs, and a new optional, category of custom-ordered license plates.

Additionally, the government will also fund a temporary incremental monthly increase of $50 in the old age pension administered by National Insurance Board.

The fiscal deficit has been budgeted at $1.3 billion or 11.6 percent of GDP — the “largest deficit to be incurred by any government in the history of The Bahamas”.

In August 2019, the government reported the lowest deficit in a decade, recording a deficit reduction of 46 percent year-on-year, ending at $222.4 million or 1.7 percent of GDP.

Today, Turnquest said Dorian and COVID-19 has levelled a “monstrous” back-to-back impact on The Bahamas.