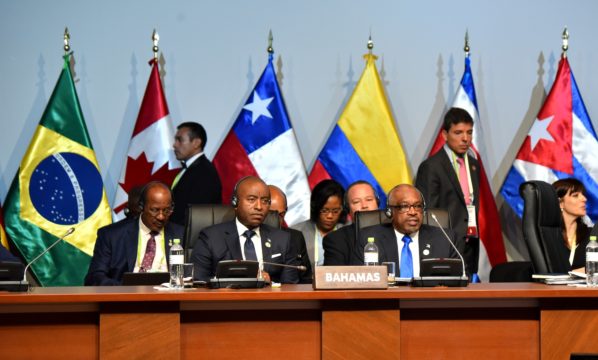 Part of The Bahamas delegation that attended the Eighth Summit of the Americas in Lima, Peru over the weekend. (Photo: BIS)

Spokesman for the Minnis administration – Press Secretary in the Office of the Prime Minister Anthony Newbold said Tuesday, that the government will do a better job in being transparent, especially as it relates to government travel.

Government came under heavy criticism by opposition members, who questioned why the large delegation of more than 16 persons who are presently in London for the Commonwealth Heads of Government meeting (CHOGM), is necessary.

Newbold answered questions on the issue during his weekly press briefing yesterday, noting that government is working on giving the information in a timely fashion.

“The prime minister has committed to providing a spreadsheet on all of the travel and all of the trips for him and other minister,” Newbold said.

He responded to why many government Ministers travel without revealing to the public the details of that trip – a promise made to the Bahamian people in the lead up to the 2017 general election.

“We are working on getting them to understand that they need to say before they leave that they are on this trip. When they return they are generally reporting on their trips… but it is something that has to be corrected and we are working on that,” he said.

The press secretary also responded to questions as to why Social Services and Urban Development Minister Lanisha Rolle was a part of that delegation.

Rolle’s ministry issued a press release earlier this week that stated that she participated in talks on gender equality and women’s rights at Commonwealth World Forum, which is held at the CHOGM meetings.

“She is not a part of the government’s delegation,” Newbold explained. “She attended some meeting and that was a part of her ministry’s budget.”

While in opposition, the government criticized the then Christie administration for excessive travel at the expense of tax payers.

The Progressive Liberal Party (PLP) has since fired back stating that the government is doing the same thing it was accused of.