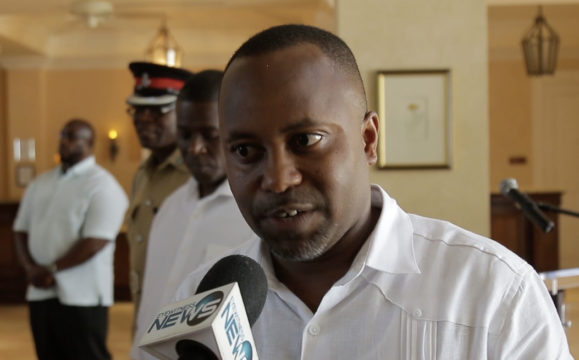 NASSAU, BAHAMAS –  Minister of State for Grand Bahama Kwasi Thompson set the record straight on Tuesday following suggestions by critics that for weeks, government turned a blind eye to the power theft allegations that were levied by the Grand Bahama Power Company (GBPC).

The said allegations led to the recent disconnection of several fast food franchises owned by the well known Cooper family in the nation’s second city.

The standoff between the two parties began in early March.

Investigations launched into the claims revealed that the gadgets were actually bogus and that the family and other business owners on the island had fallen prey to a massive scam which caused the power company hundreds of thousands of dollars in lost revenue.

The franchises were taken off the power grid and forced to use generators.

After nearly one month, only some of the franchises have been placed back on the grid.

Fred Mitchell, chairman of the opposition Progressive Liberal Party (PLP) and PLP leader Philip Brave Davis lambasted the government for failing to address the matter in a timely fashion. However, Senator Thompson shot down the opposition’s assertions on Tuesday and affirmed that government has actually been involved in the process from day one and remains optimistic.

“Government has been engaged with the businesses and the power company from the very beginning,” he said.

“We understand that communications and discussions are continuing with some of those businesses.

He continued, “the process is ongoing and we have been engaged in it from the beginning and continue to be engaged with those businesses and the power company until there is complete resolution.”