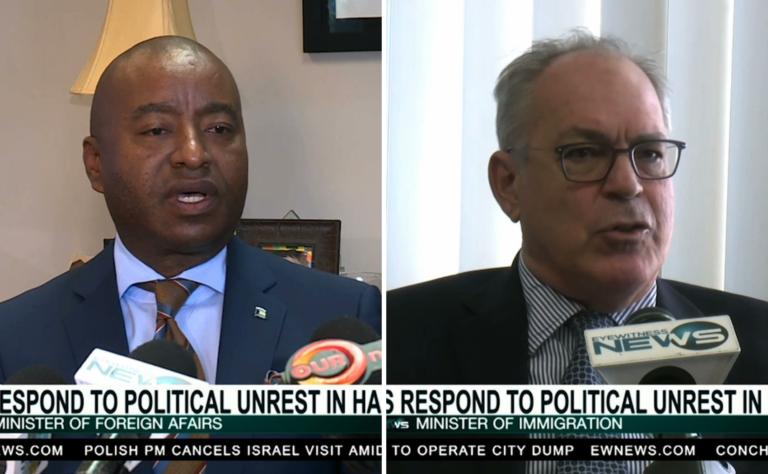 NASSAU, BAHAMAS – Political unrest continues in Haiti and The Bahamas is on guard for the potential influx of illegal Haitian immigrants, both immigration and foreign affairs ministers confirmed to Eyewitness News Online Monday.

The Bahamas embassy ceased operations in Haiti last week and all consular staff were flown back to Nassau.

Over the weekend, the government also announced a temporary halt on all deportations as turmoil in Haiti has left almost one dozen dead.

In response to a projected influx in Haitian refugees, the government has beefed-up border patrol and is preparing to establish a special facility in Inagua to house illegal migrants while repatriation has been suspended.

Immigration minister Brent Symonette confirmed that efforts are underway but the facility is not yet operational.

“We’re in the process of looking at facilities down in Matthew Town,” Symonette said.

“Obviously we can’t build a base overnight. So, it will have to be churches or civic organizations.

“Extra officers have been sent down to Matthew Town and we are also making sure that police, defence force and immigration are beefing up patrols.”

Immigration officials feel that these efforts will help to keep illegal immigrants at bay.

Meantime, Darren Henfield, Minister of Foreign Affairs asserted that the measures to accommodate migrant overflow is only temporary and the government will immediately resume repatriation once the dust has settled in Haiti.

“The priority for us is to resume repatriations as soon as possible,” Henfield said.

“As soon as we can establish with the Haitian government, and our people, when it’s time for them to return – and even outside of their return –  we are looking at ways and means to begin repatriation efforts again as soon as possible.”

In a statement released Monday, RB suggested that the immigration department, as a form of deterrence, make it clear that any person who lands in The Bahamas, without permission will have no chance of obtaining a work permit or residency in The Bahamas.

In the bigger picture, Henfield suggested that CARICOM will need to discuss how, as a region, it can help Haiti with its economic woes and population migration.

“We all know that Haiti is the poorest country in the hemisphere and we all know that illegal migration is inspired by economic reasons; so, we have to find a way to encourage commerce in Haiti which will lead to encouraging more Haitians to stay at home,” he said.

The region will also see how best it can clamp down on those responsible for aiding in illegal migration.

“There has to be more done, from an investigative point of view, to find out who these captains are and who these people are behind the scenes that are benefiting financially from illegal migration to The Bahamas,” Henfield said.

Following government’s announcement to halt deportation to Haiti due to civil unrest, more than 64 undocumented Haitian nationals in a Haitian sloop were apprehended near Compass Point in The Exuma chains shortly after 10:00 a.m. Sunday.

The illegal immigrants were brought to the capital for processing by defense and immigration officials, the Department of Immigration confirmed.

According to immigration officials, a total of 218 Haitian nationals have been apprehended for the year.

Government is also stressing that there will not be any soft spots for illegal migrants apprehended during the ongoing political unrest.

“There will be no amnesty or regularization of any illegal immigrant that comes to The Bahamas,” Symonette said.

In the meantime, the government said it stands by Haiti’s president Jovenel Moise as he was duly elected to that post.