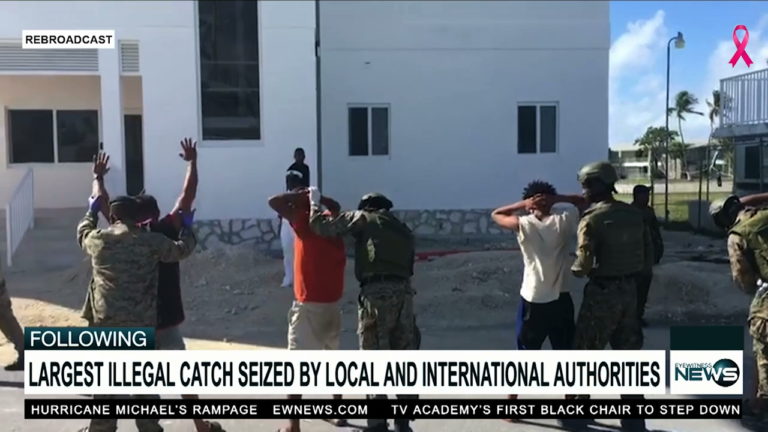 The three Dominican “motherships” with a total of 124 fishermen who were poaching in Bahamian waters over the weekend arrived at the Defence Force Base on Tuesday. But it was not the ships’ arrival that surprised those present, but the contents found.

Discovered just a few feet below one of the vessels, disguised by a small hole, was a freezer in one of the ships packed with scores of grouper, snapper, lobsters, turbot, undersized crawfish and crawfish meat, which all could be sold for thousands.  It was clear that the fishermen were on a mission to rape the waters of The Bahamas – with little to no concern of the havoc they had wreaked on the country’s fishing industry.

“It is tragic when you go into the hole and you see the amount [of fish caught] and the fact that so many of the lobsters have been undersized,” said Minister of Agriculture and Marine Resources, Michael Pintard.

“You can expect that we are going to continue to be aggressive. We are grateful to all our partners, all of the countries surrounding us, the United States (U.S.), and any other government who assisted us.”

Pintard said it was premature to give an exact figure on the amount of seafood that was seized on the Dominican vessel. He did state, however, that the amount far exceeds those caught by previous poachers.

“If you recall, we inspected the Roni several weeks ago, and the catch on these vessels far exceed the catch on that vessel. The poachers that are coming into our waters have no concern about future generations, whether they are Bahamians or others who we feed,” he said.

Back in July, in an interview with Eyewitness News Online, local Fisherman Captain Keith Carrol called on the government to create stiffer penalties to deter poachers from fishing in Bahamian waters. Pintard stressed Tuesday that these stiffer penalties will come soon.

“In November the Fisheries Act, which will be amended, will go to the Cabinet of the Bahamas which calls for far stiffer penalties for those persons who are captaining these [poaching] vessels as well as those persons who are working on these vessels that are in tremendously bad condition.

Saturday’s apprehension of a Dominican fishing vessel was the second recorded this year.

Back in July, RBDF captured over 40 crewmates, charging each one $50,000 totalling over $2.3 million. Alongside the charge, the captain, Radhames Hernandez was convicted and sentenced to 18 months in prison.

Apryl can be contacted at asands@ewnews.com.