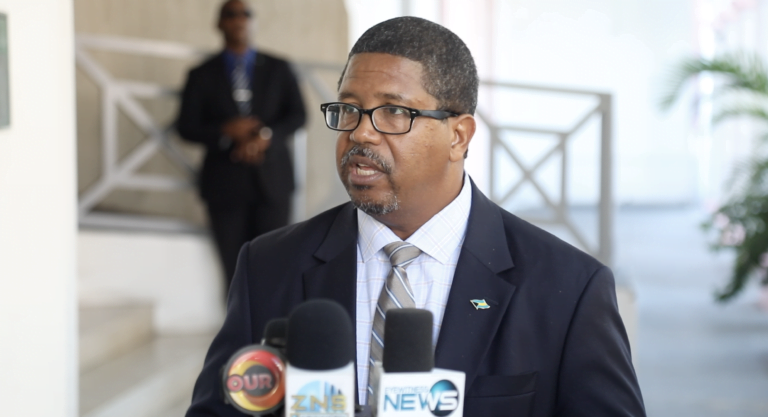 NASSAU, BAHAMAS – The government is currently in discussions with the Grand Bahama Utility Company Limited (GBUC) over its charge to residents for non-potable water in the aftermath of Hurricane Dorian.

During a contribution in Parliament last month, Turnquest was very critical over the pace of services being restored by the Grand Bahama Power Company and GBUC and also criticized the Grand Bahama Port Authority’s ability to regulate the utility providers.

Turnquest furthered if the organizations were not prepared to do what needed to be done to get services restored, then they ought to “divest themselves” of the responsibilities.

Yesterday, Turnquest said: “The electrical company has indicated that they are now going to extend the transmission lines out as far as Equinor in the first stage and work the service back from there towards the Freeport area.”

“We would give electricity to the major settlements in East End and then we will look at how we extend the transmission lines out to McClean’s Town and Sweetings Cay – whether we run the lines in the interim or whether we drop a generator in the community itself to be able to provide some temporary supply to those areas.”

Turnquest said: “That’s very positive news and certainly an improvement in the picture that were faced with before the end of the year.

“So we do want to thank to the power company for acceding to our requests in that regard.

“That will facilitate the redevelopment and the relocation of people back to those communities which is critically important.”

The wrath of the storm also compromised Grand Bahama’s ‘supply’ of fresh salt-free water in its wellfields.

Residents have been advised through public notices that the water can be used for sanitary purposes only and not for consumption.

While the GBUC has dropped wells in fresh water reservoirs, residents are being charged for the service and offered a 25 percent discount.

“We are sensitive and certainly presenting the case of the residents of Grand Bahama to the utility company, who feel the utility company charging for this water that is not potable water, may be unfair,” Turnquest said yesterday.

“We certainly are having that discussion. The utility company is offering a discount on the water, nonetheless the residents do have a position, rightfully so, that if they are not able to cook and drink with the water that there really ought to be a deeper discount than 25 percent.

“ So we continue to have those conversations to see if we can come to a more amicable resolution/solution to that.

“Nonetheless, at least we can see some positive movements  in terms of trying to address the issue in a sustained way.”

The East Grand Bahama MP said that GBUC has indicated that they are working on dropping a few more wells in some fresh water reservoirs that they found on the island.

“Hopefully that will help to reduce the salinity in the water, and I think the hydrologist have indicated that by May, June, we should start to see a significant increase in the quality of the potable water,” he added.