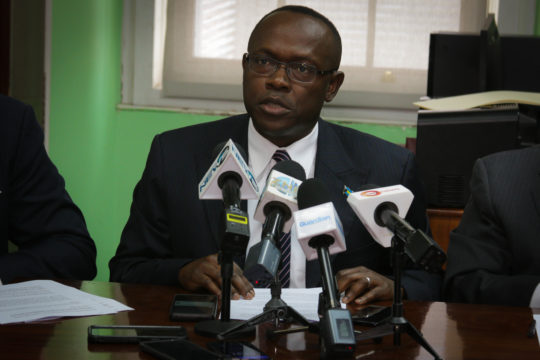 Junior doctors continue to strike over holiday pay owed since 2014

NASSAU, BAHAMAS — Following the government’s admission that it did not account for union payouts in the 2019/2020 budget, Progressive Liberal Party (PLP) Deputy Leader Chester Cooper said yesterday that the Minnis administration needs to put more focus on the Bahamian people and less on the numbers.

While speaking to the media following a laying of wreath at the mausoleum of the late Sir Lynden Pindling at St. Agnes Cemetery, Cooper said that the opposition warned the government about shifting its focus before.

“We’ve said before that the government has often been too focused on the numbers and not enough focus on the people,” he said.

“From a financial perspective I believe that budgeting is about forecasting.

“Too [much] focus on meeting a deficit target and not enough focus on providing services for the country.”

Cooper said that to hear that the government has not accounted for the unions in the budget is startling and again highlights the government’s disregard for the people.

“Less focus on the numbers but the substance of the numbers and this has been our constant complaint with the ministry of finance,” he said.

“They are not doing enough to ensure that the Bahamian people get the services they need.”

During Saturday’s meeting between Dr. Hubert Minnis, his Cabinet and several union heads, the Ministry of Finance made a presentation to the union leaders on the country’s fiscal position and the critical need to lower expenditure, boost revenue and manage the country’s deficit and national debt.

“If you are going to advise us of the country’s financial position in light of the fact that there are industrial agreements that would’ve already expired, I think you’re timing is poor,” Ferguson said.

“What they need to do is talk to the stakeholders before they make these budgets up and that’s the problem they are having,” Maynard added. “It’s showing and they are beginning to lag behind.

There’s absolutely no excuse. You knew all the contracts were up last year.”

While Ferguson indicated that Saturday’s meeting was a welcomed gesture, he said he believes the government is in a financial position to satisfy the unions’ members who he said have not asked for more than what they are owed.