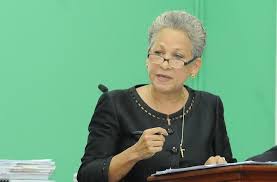 Member of Parliament (MP) for Englerston Glennys Hanna-Martin yesterday criticized Prime Minister Dr. Hubert Minnis, for “excessive and extravagant travel”, so soon into the his first term as leader of the country.

In an interview with Eyewitness News, Hanna-Martin said, this is just another chapter in a continuing series of about turns and hypocritical stances, that were previously taken by Dr. Minns.

While in opposition, Dr. Minnis often criticized and accused the Christie administration, including the prime minister and the Minister of Foreign Affairs and Immigration Fred Mitchell, of overspending on travel.

In fact, the Minnis administration last October, opened an investigation into the travel expenses of government officials under the Christie administration.

Hanna-Martin on Friday questioned why “so many persons” travelled with Dr. Minnis to Peru and London.

Prime Minister Dr. Hubert A. Minnis led a delegation to Lima, Peru, where he addressed the third CEO Summit of the Americas, scheduled for April 12-13.  He will then proceed to London to attend the 25thCommonwealth Heads of Government (CHOGM) meeting April, 16-20.

“I know the prime minister has to travel and certain ministers or the relevant minister will have to go in certain circumstances,” she said.

“I would not normally criticize travel but this same prime minister got on his soap box and repeatedly castigates what the travel of the former prime minister. Makes you wonder is his real concern was that he wanted the travel for himself because within minutes, figuratively speaking, you turn around and do the same thing even more excessively. This is just one of many, many things that makes us call into question the character of Dr. Minnis. If it was just one thing I would not mind but when it is one thing after the other that you take a strong position and then back pedal on it makes you wonder.”

Hanna Martin also said she does not recall “a new prime minister taking so many trips in their first year of office.”

For the CHOGM leg of the trip, the prime minister will be accompanied by his wife Patricia, along with a delegation comprised of Henfield and wife; Minister of Environment and Housing Romauld Ferreira and wife; Minister of State for Grand Bahama Senator Kwasi Thompson and wife; Sears; Director General in the Ministry of Foreign Affairs Sharon Brennen-Haylock; Director of The Bahamas Investment Authority (BIA) Candia Ferguson; Gardiner, Katherine Marsh and Bowe.