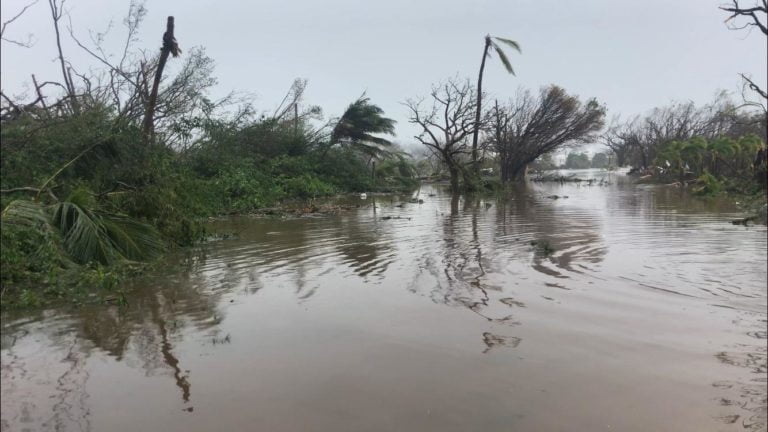 NASSAU, BAHAMAS — As the islands of the northwest Bahamas take on the brunt of Hurricane Dorian, a catasprohic Category 5 storm that wreaked havoc over the Abacos for over eight hours today, the government said it is coordinating its response, including preparing exigency orders to allow donated and purchased relief supplies to enter the impacted areas free of taxes and fees in the immediate aftermath of the storm.

“The objective is to allow vital goods to move smoothly to the areas most in need of restoration and rehabilitation,” the Ministry of Finance said.

According to the ministry, it will publish more detailed information during the week to facilitate those eligible to benefit from relief measures.

“We continue to keep those in the hurricane’s path in our prayers and ask Bahamians to heed the warnings issued by the National Emergency Management Agency (NEMA).”

As od 8 p.m., the eye of Dorian was 70 miles east of Freeport, Grand Bahama, and just west of Marsh Harbour, Abaco.

The “extremely dangerous” storm was moving west near five miles per hour.

A slower westward to west, northwest motion is expected for the next several days.

On this track, the core of Dorian, “will continue to point Great Abaco and Grand Bahama” tonight and Monday.

Dorian has maximum sustained winds of 185 miles per hour, with higher gusts.

“The Bahamas Department of Meteorology’s Doppler weather radars in New Providence and Marsh Harbour, Abaco, and emergency management hurricane models indicate that catastrophic hurricane conditions are occurring in the Abacos and will continue this evening and begin subsiding tonight,” the department said.

“Meanwhile, residents in North Eleuthera will continue to experience tropical storm force winds with severe shower activity this evening and into tonight.”

Residents in New Providence and North Andros will also continue to experience occasional severe shower activity with gusty winds for the remainder of this evening and tonight.

As Doria lingered just west of Marsh Harbour on its track for East Grand Bahama, authorities said residents should not be deceived by the lull in the winds as the eye passes and should “remain indoors and prepare for the second phase of the hurricane”.

As Dorian slows down, life threatening storm surged will raise water levels by as much as 18 to 23 feet above normal tide levels along the eastern, norther and western shores of Abaco and the northern and southern shores of Grand Bahama tonight through Tuesday.

The destructive system is also expected produce 12 to 24 inches of rain across the northwest Bahamas, with isolated amounts up to 30 inches.

Video recordings on severe flooding in the Abacos continued to surface on social media today.

There were reports of some flooding in low-lying areas of New Providence last night.