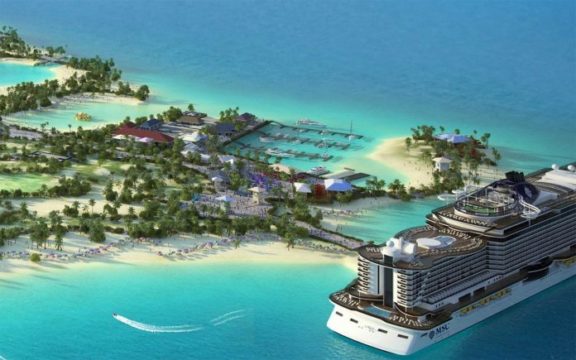 The government affirmed its commitment to MSC cruises yesterday as it recognizes the cruise company’s multi-million-dollar development at Ocean Cay as a marine protected area once the private island officially opens in just over three months.

The resort opening is pegged for November 9, according to MSC developers.

The man-made island was a former industrial sand extraction site.

The international cruise company has not only transformed the 95-acre island into a destination that is expected to welcome over 500,000 visitors in its first year, but has also received government’s stamp of approval for the island to become a marine reserve protected area.

“The Bahamas, having joined the 2020 vision to have 20 per cent of the country designated for marine reserves, to actually have a private company that allows it to reach its target through such an investment obviously we received not only a welcome, but all the support from government to ensure that we achieve the status of marine reserve,” said MSC Cruises Executive Chairman Pierfrancesco Vago.

The transformation at Ocean Cay began with the removal of 7,500 tons of scrap metal and replaced with 75,000 plants and shrubs.

Extensive underwater assessments of coral reef have been completed scientists.

As the site prepares to open in early winter 2019, it will also become home to marine biologists to conduct scientific research into coral restoration and the protection of 64 square miles of water surrounding Ocean Cay as a marine reserve, according to developers.

“A lot of the anxiety on these types of developments are when you typically take a pristine area and put a development there, and what type of impact it will have on that type of environment, but here, the environment was in an extremely degraded state,” McKinnon said.

“Environmental NGO’s, marine biologists and everybody were quite excited about the possibility about rebounding a challenged ecosystem.”

MSC engaged environmental consultancy firm Design Elements to oversee the environmental management of the project, according to its principal, Tanya Ferguson, who said the BEST commission approved.

“Our role is to ensure that during the construction phase, the activities associated [with] the project do not add to [the] overall environmental impact,” Ferguson noted.

“Like Matthew said, due to the nature [and] the scope of this project, we have received little to no pushback from environmentalists.”

According to MSC, 330 Bahamians have been working to prepare the island to welcome its first group of guests.

Of that figure, 90 percent will be Bahamian, according to MSC officials.