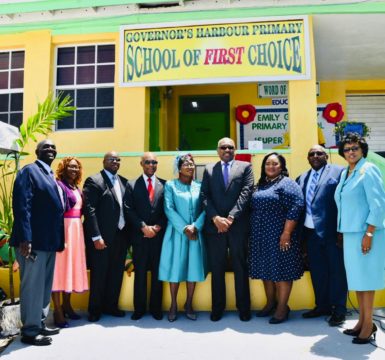 GOVERNOR’S HARBOUR, ELEUTHERA – Her children called her blessed. Her students called her a top performing teacher and the country’s leader named her a nation builder for her multiple contributions to the development of The Bahamas.

Prime Minister Dr. Hubert Minnis delivered the keynote address at the official renaming of the Governor’s Harbour Primary School to the Emily Georgenia Petty Primary School during ceremonies on Friday, May 3, 2019.

“It is a tremendous pleasure to be with you this morning for the renaming of Governor’s Harbour Primary School in honor of Ms. Emily Petty, a dedicated teacher and nation-builder, whom we have the privilege of so honouring.

“It is a fitting recognition of a woman of faith and courage who, with generosity and passion, donated her lifeblood to her country and to the good people of Eleuthera,” the Prime Minister said.

Governor’s Harbour holds the administrative centre of Eleuthera, where Ms. Petty was born on November 10, 1951.  And after a well-rounded education which included becoming one of the fastest females in the 100m, 200m and excelling at long jump, Ms. Petty returned to the settlement and started her career in the teaching profession and served for more than 46 years. She also joined the Royal Bahamas Police Force Reserves and rose to the rank of inspector.

Ms. Petty worshiped at Ebenezer Baptist Church and subsequently at Wesley Methodist Church where she remains a member. She is also involved in a number of wide-ranging activities geared toward the further development of the community and country. She was also revered as an exemplary public servant, a dedicated mother and grandmother.

The Prime Minister drew reference to the extraordinary history of Eleuthera, where the Dissidents of Bermuda and the Eleutheran Adventurers of the 17th Century enjoyed advanced ideas about religious freedom and, autonomy, both hallmarks of democracy.

These freedom-seekers on the isle named for freedom, made, in the words of former Governor General Sir Arthur Foulkes, “a fascinating contribution to Bahamian history before the collapse of their colony,” the Prime Minister said.

He added: “There is a link between the Eleutheran Adventurers of the 17th Century and 20th and 21st Century educators like Emily Petty.

“Because of nation-builders like Emily Petty, scores of young people have enjoyed the freedom to pursue their dreams because they were afforded an education.”

The Prime Minister also thanked the Minister of Education the Hon. Jeffrey Lloyd — who too lauded the accomplishments of Ms. Petty in remarks at the renaming ceremony, and the hardworking staff of the Ministry of Education for their work throughout the country.

The Prime Minister pointed out that at the time of Ms. Petty’s birth the lives of women in this country were very different from they are today.

But fortunately, however, during Emily’s girlhood a group of brave Bahamian women were already tirelessly advocating for her rights and the rights of all females in The Bahamas.

Two of those very same women, he said, Mable Walker and Dr. Doris Johnson, were also renowned educators whose legacies will never depart from the hearts and minds of Bahamians as their names are also indelibly etched on learning institutions in our country.

“But today is one of celebration, he said, “Today we celebrate Emily Petty and all the educators on Eleuthera and throughout The Bahamas, who, over successive generations, dedicated their hearts and lives to educating our children and young people.”

The Prime Minister concluded: “It is my hope that today’s proceedings will inspire a new generation of educators, both male and female.”

The renaming ceremony was complemented with song and choral speaking by students; and tributes by family members and community leaders to which Ms. Petty expressed thanks for such an honour.

This article is written by Lindsay Thompson – Bahamas Information Services.