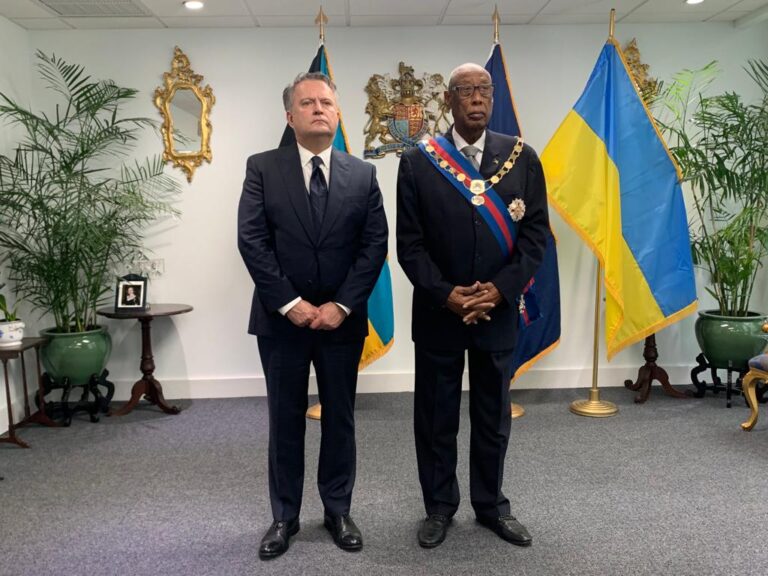 NASSAU, BAHAMAS — Ukrainian Ambassador to The Bahamas Sergiy Kyslytsya yesterday said he respected CARICOM’s decision to abstain from a UN vote on reparations for his country.

Kyslytsya presented his credentials to Governor General Cornelius Smith at the office in One Montagu Place on East Bay Street.

The pair exchanged gifts and made a toast to peace and the relationship between The Bahamas and Ukraine.

CARICOM opted to abstain from the vote on the draft resolution for the “furtherance of remedy and reparation for aggression against Ukraine” citing the process – if moved forward – did not appear to have adequate oversight, particularly in the context of an ongoing war.

When asked about the vote, Kyslytsya said that he respected the “very difficult decision”.

“It was the result of very difficult inter-agency interaction with many governments, but what matters is that we got 94 votes in support of that resolution, and the General Assembly has spoken,” he said.

“So now we have to follow up on the resolution and we have to implement the decisions and I am sure that most, if not all, CARICOM countries are very strong when it comes to legality, to international law, international humanitarian law, and that’s what may come what might make them democratic nations.”

Kyslytsya has a history of working in international diplomacy, most notably at the United Nations where he was stationed in New York. He said that it does not matter where an individual is geographically located so long as they are guided by the right principles.

“What matters is the principle of full equality and sovereignty and independence and the spirit of love, of dignity and liberty—and that is what you see every second day in the United Nations, where The Bahamas has the same vote as China, as the United States, as Ukraine in the General Assembly.”

He continued: “So I think that we have to respect ourselves, we have to learn about ourselves, and that will be part of my mission to learn more about this country and to make our people know each other much better, and of course, when the war is over in Ukraine, we’ll explore all possible avenues of developing business relationship tourism through cultural exchanges.”

The Ambassador described the support from the global community as ‘incredible’ given that his country is in a time of war. However, he confidently asserted that the protracted conflict will in no way slow his country’s diplomatic endeavours.

“There are many countries who never believed that we would survive a week of the invasion, and we are now many months in the invasion and we are not only surviving, we are also reoccupying.

“The territories have been occupied temporarily by the aggressor state. Ukrainians are exceptionally resilient people and we are proud to be resilient. That’s why we are not waiting for the military defeat of Russia, which is imminent and that’s why I am here today presenting the credentials.”