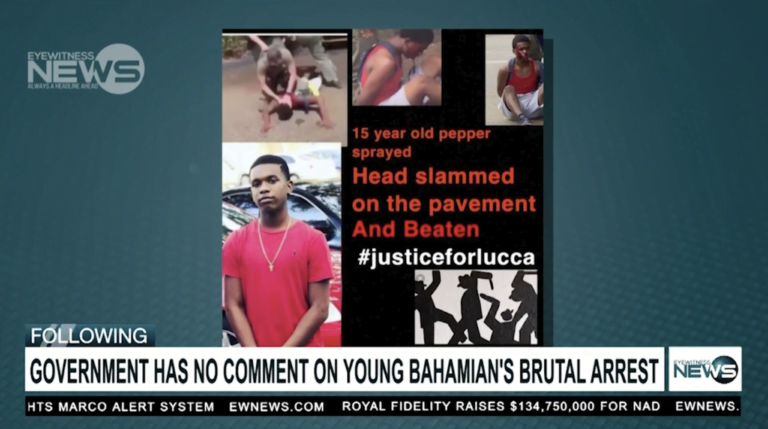 Despite calls from the opposition for the government to act in relation to a video recording which depicts a Broward County police officer punching and slamming a 15-year-old Bahamian boy, government officials have remained tight-lipped on the matter.

When asked for comment outside Cabinet yesterday, Minister of Foreign Affairs Darren Henfield and Minister of Tourism Dionisio D’Aguilar refused to comment on the incident.

The recording of the incident, which took place last Thursday, was widely circulated on social media and has gone viral.

In the video, the 15-year-old boy, identified as Delucca Rolle, was sprayed with what appeared to be pepper spray before being punched in the faced, before another officer slammed the student’s head on the pavement.

The scene unfolded in Tamarac, Florida in front of a McDonald’s.

According to reports two officers — Florida Deputy Christopher Krikovich and Sergeant Greg Lacerra — responded to a disturbance outside of McDonalds.

Upon arriving, the duo reportedly arrested a friend of Rolle’s.

It is alleged that Rolle’s friend dropped his cellphone during his arrest.

Rolle reportedly bent down to pick up the phone and that’s when he was approached by the officers.

Cell phone footage shows Kirkivich spraying Rolle with pepper spray before both officers tackled the teen to the floor.

The officers slammed Rolle’s head against the pavement.

The video footage also captured the officer punching Rolle in the head before handcuffing him.

According to information released by the Broward Country Police, Kricovich has been placed on restricted duty until an investigation into the matter has been complete.

But Broward’s County Mayor Mark Bogen has called for Krikovich to be fired immediately.

Yesterday, Shadow Minister for Foreign Affairs Senator Fred Mitchell, the chairman of the Progressive Liberal Party, cried shame on Henfield for his silence on the matter.

“Given the prominence of this, government ought to intervene and find out what happened,” Mitchell asserted.

“What are the circumstances and in what way can they assist?

“Sucking up to the United States does not change anything.

“What you have to do is look out for the interest of your citizens and the U.S. understands that very well, and don’t care whether or not we issue advisories for our residents.

“The [government] seems to have this view that if you suck up to the U.S. you will save yourself from public embarrassment.”

According to an arrest warrant affidavit, Deputy Christopher Krickovich, one of the officers in the video, alleged that Delucca took an “aggressive stance” toward of the police officers.

Krickovich was placed on restricted duty, according to U.S. authorities.

The matter is under investigation, according to the Broward County Sheriff’s Office.

Nearly a week after the incident, civil rights activists, including Shaun King, have expressed outrage and taken to social media to demand justice in what they claim is another case of racism against black people in America.

Rolle’s arrest comes days after the U.S. Department of State issued a warning to its citizens about remaining cautious when traveling to The Bahamas.

Critics slammed the Minnis administration for not standing its ground to force the U.S. Embassy in Nassau to retract the advisory.

The government has also been criticized for not issuing an advisory of its own after a Bahamasair airport manager was stabbed in the face last month in Pembroke Pines, Florida.

Mitchell said during the Christie administration’s term, he as the foreign affairs minister, issued warnings about young black Bahamian men exercising caution while in America.

He said there is no reason why the Minnis administration should not do the same.

“When we were in office, we issued a very comprehensive statement warning young black Bahamian males to be very careful with their interactions with police in the United States; particularly given the incidents of racism, which appeared to be happening so frequently,” Mitchell said.

“So, we thought at least there ought to have been some advisory again from The Bahamas government telling its citizens to be careful.”

It remains unclear if the government intends to address the matter.