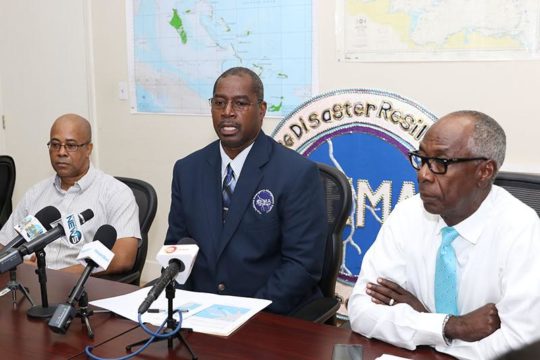 During a press conference at the Office of The Prime Minister (OPM) on Tuesday, Press Secretary Anthony Newbold in response to Eyewitness News’ question on Ragged Island, Newbold informed the media that the Free National Movement (FNM) administration is near completion of their assessment of Ragged Island.

“Based on the recovery unit report who was down there – there has been some financial assistance given,” said Newbold.

“The actual rebuilding of that island again, waiting for the approval of documents from the Ministry of Works. So that the basic infrastructure… police station, nurses offices, etc, before those they can actually be reconstructed.

“Other than that, (again) whatever basic support you receive from the government in these kinds of situations will be provided to all of them.”

Additionally, Newbold confirmed that the Prime Minister’s goal of turning Ragged Island into a “green island” is not plausible at the moment.

“The Prime Minister says id he intends to make it [Ragged Island] a green island, again, that is not going to happen like that.

“Again, you get the report, the recovery unit was down there and made a report… the architects down there and Ministry of Works needs to approve the drawings for that basic infrastructure to be built… all of that needs to be taken into consideration,” Newbold further added.

According to Newbold, the government is looking at all the recommendations and determining what’s the best way to move forward.

The news comes as Hurricane Florence – a category 4 storm – barrels toward North and South Carolina. Catastrophic flooding and high-water surges are expected to occur and as it currently stands, The Bahamas is in the clear.