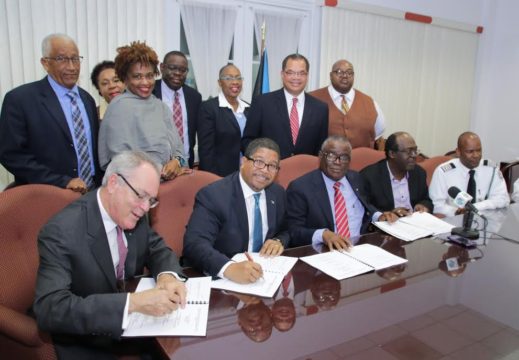 NASSAU, The Bahamas — The Government signed a new Industrial Agreement with the Bahamas Customs, Immigration & Allied Workers Union at the Ministry of the Public Service, Thursday, January 18, 2018.

Minister of the Public Service and National Insurance the Hon. Brensil Rolle thanked the Minister of Labour, Senator the Hon. Dion Foulkes who he said was instrumental and extremely focused on ensuring that the negotiations concluded in the shortest possible time.

He also thanked the negotiators from the Public Service, who assisted and worked tirelessly to ensure that the agreement was reached and signed in a reasonable time.

“As always we believe it is the Government’s duty to come to some agreements with the unions that are in the best interests of the people of The Bahamas and the workers.  So today, I am very pleased that we are all here to witness this historical event.”

Minister Rolle explained that negotiations began in 2012 with the Bahamas Customs, Immigration & Allied Workers Union.  “The negotiations themselves progressed to June 2013 when the Union filed an action against the Government claiming that the wages of its members were unilaterally reduced and overtime was a part of their wages.

“This matter was resolved in the courts and negotiations again resumed in June 17, 2016.  In the interim however, on December 2014, the Government in good faith signed an agreement with the Union, which paid the uniformed members of the bargaining unit on a number of benefits.”

He noted, however, that after several meetings in 2016, an agreement was reached on the majority of these issues including an increase in salaries and allowances.  However, talks stalled again once again because of a general union concern.

Minister Rolle said, “The former Government sort to in our view divide the workers by inviting members of the Customs, Immigration & Allied Union to write into the Government if they wanted their salary advances.

“The result of this was devastating to some degree to the public service because the Ministry of the Public Service then had to create two salary parts for individuals who had accepted the advance and those who were complying with the general views of the union.”

He said, “To some degree, some refer to this as a strategic attack by the Government to bust the union by encouraging and causing some members to receive benefits before the negotiations were fully addressed.”

“As a result of that when we came to office in May, the Government through the Minister of Labour re-opened these negotiations and successfully in this very short period concluded the results.”

For his part, Minister Foulkes said the Minister of Labour played the role of negotiator/conciliator to ensure that the talks went well and that there was respect on both sides of the table, which happened.

He said upon being appointed as the Minister of Labour in May 2016, one of the first meetings he had was with Mr. Obie Ferguson and his executive team from the Trade Union Congress which had as number one on its list of concerns, Customs and Immigration.

Minister Foulkes also noted that number one on the issue for the Customs and Immigration Officers was keeping the insurance coverage for which they have become accustomed, and the new agreement will allow that to continue.

President of the Customs, Immigration & Allied Workers Union Sloan Smith said the Agreement also includes the opening of salary scales that will help some individuals who were stuck at their bar, and an increase in uniform allowance among other benefits.  The contract will expireJune 30, 2018.