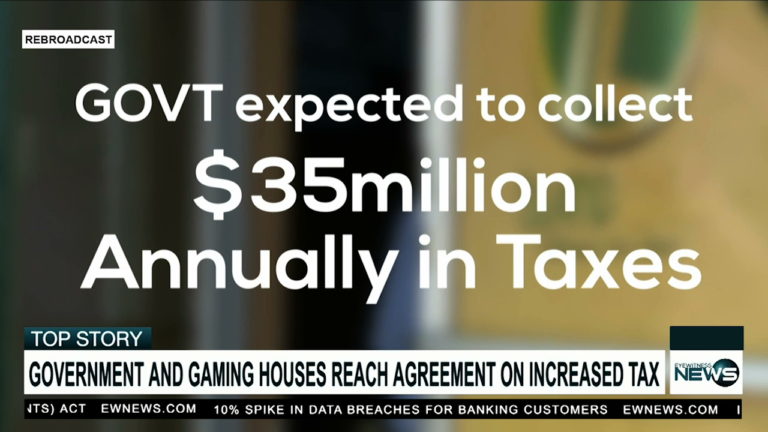 NASSAU, BAHAMAS – After months of negotiations, the government has finally reached an agreement with gaming operators to increase taxes on the gaming industry and collect the payment of back taxes.

A statement issued Wednesday from the Office of the Prime Minister (OPM), outlined that effective January 1, 2019, all licensed gaming operators will pay 15 per cent on $0 to $24 million of revenue and operators earning anything greater than $24 million will pay 17.5 per cent.

“Based on the increased tax rate, the government is expected to collect approximately $35 million in taxes from gaming houses annually,” the statement read.

The government said this new tax is expected to raise $15 million annually in tax revenue for the government.

As for casino games, there will be no taxes derived from winnings.

The government said the new gaming tax structure represents a 127 per cent increase in taxes on gaming operators, securing just under $50 million in total revenue, compared to $21 million in 2017.

“All back taxes will be collected before the end of this budget year at the previous 11 per cent rate,” the statement read.

The statement outlined that with the beginning of the regulation of the gaming industry on January 1, 2015, the rate of taxation on net taxable revenue of the seven licensed gaming operators was set at 11 per cent and was expected to yield approximately $21 million.

The Government said it had two objectives going into the most recent round of negotiations, which was to: ensure the industry pays its fair share of taxes, and to end the deadlock between the government and the gaming industry.

“This is about what is best for the Bahamian people, and securing a deal will mean more funding to support much-needed programs and better services for Bahamians,” the statement read.

The government announced last May that a five per cent stamp tax would be applied to all gaming patron’s deposits, all non-online games and digital sales.

It also announced a sliding scale tax on the gaming sector.

The taxes were originally set to take effect on July 1, but both had been delayed.

On Wednesday, Minister of Tourism and Aviation Dionisio D’Aguilar said solving the tax dispute through the courts could have meant years of expensive litigation and it would have prevented the government from collecting taxes.

“Because of the discussions with gaming industry leaders, the government was able to secure an increase in taxes as well as the back taxes owed to the Public Treasury,” D’Aguilar said.

Meanwhile Gershan Major, the CEO of the Bahamas Gaming Operators Association (BGOA) said while it is always beneficial to avoid a lengthy court battle, the government’s newly designed tax regime still represents a 65 per cent tax increase which some gaming operators will still find difficult to manage.

“The industry was never opposed to an increase in taxation and always was willing to pay its fair share, however the methodology to achieve the increase was the crux of our disagreement,” Major said.

“This ordeal highlights a broader challenge and signals the need for a deeper look at our national tax regime and the issue of proportionality.

“At some point as a nation, we must address the inequitable way taxation is levied within and across the industries that we pay our fair share in these trying economic times.”

Deputy Prime Minister and Minister of Finance Peter Turnquest tabled the Stamp (Gaming Patrons) Rules, 2018, in the House of Assembly back in December.

The rules set out how gaming house operators should charge and collect the five per cent stamp tax.

The rules state that every gaming house operator shall pay to the treasurer the collected stamp tax by the tenth calendar day of the following month.

If the stamp tax on gaming activity results in a fraction of cent, the gaming house ought to round the figure, the rules state.

A breach of the rules or reporting requirements can result if a $5,000 fine.

The rules also stipulate that the minister can appoint an auditor at any time, at the expense of the gaming houses, to examine their records.